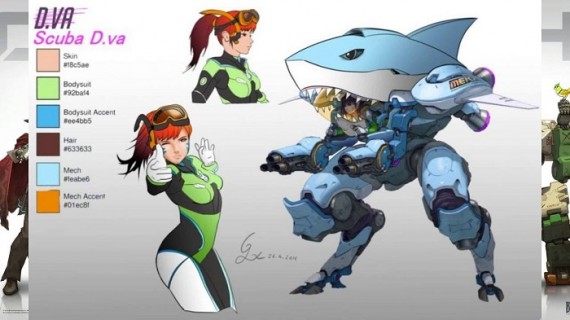 Some Overwatch fans have shared their own take in designing hero skins -- and yeah, all of them are quite stunning. (Photo : Tormental/YouTube)

Whether you agree or not, Overwatch is just one of the best first-person shooter games of today. Add to that the kind of dedication the community has for the title -- it's really overwhelming. Among the interesting topics within the fandom are the skins. Although there's no doubting Blizzard's skills when it comes to such, there's just this kind of excitement whenever a fan does it.

This one here is based on the list Inverse accumulated -- all of which are fan-made skins. And yeah, how I personally wish these designs would find their way to the game. All hopes here! But for now, back to the brass tacks.

If you're a huge fan of basketball and you main Zenyatta, this is the kind of skin you'd surely want to see in Overwatch. Thanks to Somanychens, we've seen the beauty of replacing those orbs with real balls. How about if he says "Life is just not a series of one and zero basketballs?" Isn't that an interesting voice line to hear?

He may be an old man, but that doesn't mean he isn't worthy of running the fashion lane. Well, Doctaword shows us just what a kind of man Soldier: 76 can be. Equipped with a stunning 1950's look, this guy has never been this macho. The greaser hero is exactly what you need in time of despair. I bet Ana will once again fall in love.

There's no doubt that D.Va is one of the many Overwatch heroes that can easily be clothed. This fan-made skin from Geddu is exactly what you'd want to see become a reality. Heck, it's even perfect for the Holiday event. The character's mech now resembles a shark's head complete with scuba diving gears. If this is to happen, I certainly won't want to see it getting nuked.

Okay, so you've seen a lot about Lucio's skins? But tell me, you've never thought of a fully-armored disc jockey dude, right? Well, not until now -- Wraeclast shows us just how beautiful such concept is. Yeah, sure he might have difficulty dancing and skating with such heavy armor; but hey, it is what it is. That headgear? It just looks perfect with Lucio's dreads.

When Blizzard announced the release of Genji's Oni Skin, many rushed their way to playing Heroes of the Storm. Now, with stunning looks such as this Templar Sentinel skin, I wouldn't be surprised if fans will once again flap their wings. This one here is made by the great WingedWilly. Here, our cyborg ninja is equipped with a nice blue color pallet topped with various replacement blades. He kind looks like an Eskimo with that head gear, though.

We know Zarya as the kind of woman in Overwatch who loves heavy stuff. Her gun (or whatever you call it)? Dude, I bet that weighs like the Eiffel Tower. But yeah, it seems like a broom to her. In this fan-made skin by Lothrean, Zarya is once again wearing a full mech armor, only that it's design in a vintage tone. Think of her armor here as somewhat similar to the older tank designs from Russia. I now understand why she says, "In Russia, the game plays you."

What are your thoughts on these fan-made Overwatch skins? Which one is your favorite? Tell us what you're thinking at the comment section below!

Like It Or Not, Overwatch Season 3 Rankings Are Accurate

Whether you agree or not, Blizzard's new ranking system in Overwatch Season 3 is actually accurate. Here's why!

Are you also stoked for the Christmas Event in Overwatch? Well, for now, here are 3 things you need to know!