How Well Can The ZTE Blade V8 Pro Perform Against The iPhone 8? 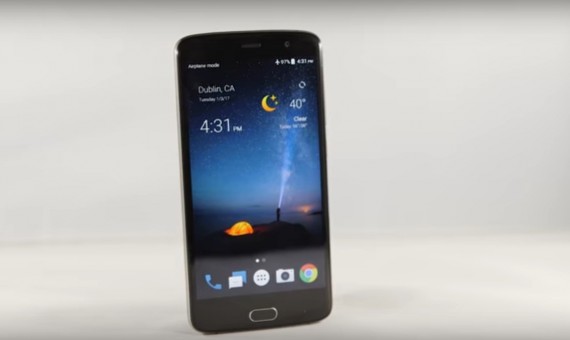 The ZTE Blade V8 Pro is a new smartphone unveiled this month. Though it is highly praised and well-received by tech experts for its amazing specs on a $230 price tag, is it enough to convince other people to buy it instead of the upcoming iPhone 8? (Photo : Engadget/YouTube)

The ZTE Blade V8 Pro's body dimensions are 6.14 x 3.03 x 0.36 inches and weighs 185 grams. For its back design, it features a dual-lens camera and a back casing cover which for me reminds me of a non-premium smartphone design. For its front design, it has a fingerprint scanner below the display screen that can also be customized to open different apps.

As with the iPhone 8, there is no exact number for its body dimensions, but we do know that it has a larger screen size compared to the iPhone 7s and iPhone 7s Plus. It will feature a curved OLED display screen and will have an all-glass casing. Just like the ZTE Blade V8 Pro, it will also have a fingerprint scanner on its front design, but it will not have a bezel home button. It will be more like a software-based home button that we see on Samsung Galaxy smartphones.

The ZTE Blade V8 Pro features a 5.5 inch (69.4 percent screen-to-body ratio) IPS LCD capacitive touchscreen (16M colors) with a screen resolution of 1080 x 1920 pixels (401 PPI) and is protected with a corning gorilla glass 3. As for the iPhone 8, it is reported to feature a 5.8-inch curved OLED display with 2k resolution. However, there are some recent reports claiming that it could reach 4k, but it could also be wrong. For the time being, let's just stick with 2k, because it seems more realistic.

The ZTE Blade V8 Pro runs on Android 6.0 Marshmallow and is powered by a Qualcomm MSM8953 Snapdragon 625. Given that it is expected to be released this month, an OS update could be a long wait as of now. On the other hand, the iPhone 8 is expected to run on the latest iOS and sport an A11 Fusion chip.

The ZTE Blade V8 Pro features 32 GB with 3 GB of RAM while the iPhone 8 is reported to feature 4 GB of RAM. However, given that Apple is reported to put everything they got on the iPhone 8 for the iPhone's 10th anniversary, this could be higher. Well, if Samsung jumped from 4 GB to 8 GB with their Galaxy S8, why can't a world-class giant tech company like Apple do the same?

On the back, the ZTE Blade V8 Pro features a 13 MP dual-lens camera. On the front, it features a 8 MP front snapper. As for the iPhone 8, all we know is that it will have a dual-lens system camera similar to the iPhone 7 Plus, but more refined and sophisticated.

The ZTE Blade V8 Pro houses a non-removable Li-Ion 3140 mAh battery. Regarding its battery life performance, standby time could last up to 552 hours and talk time could last for up to 24 hours. For its special features, there are no special features worth mentioning except the front fingerprint scanner and a fast charging feature, specifically the Quick Charge 2.0.

For a mid-range smartphone worth $230, I will not consider buying the ZTE Blade V8 Pro. Yeah, it has 3 GB of RAM, a decent processor, a customizable front fingerprint scanner, and a dual-lens rear camera which has really cool features, but I'm not really a picture-taking kind of guy, so it doesn't really have an appeal to me. Another thing is that I don't like its back casing design.

If I'm going to get a budget smartphone in 2017 among today's new mid-range smartphone models, I would go for something that looks thin and futuristic enough. You know, something easy on the eyes and won't really make you feel ashamed to pull out when you're in public (let's be honest, when someone pulls out a high-end smartphone beside us, we get a little self-conscious).

Xiaomi Mi 6 Mix vs iPhone 8: Which Smartphone Has The Better Futuristic Look?

Xiaomi is known to be one of the smartphone companies to feature innovative smartphone designs with affordable prices, while Apple is known for its tech prowess in terms of powerful smartphones with high prices, but timid designs.

Apple vs. Nokia: What The iPhone 8 Cannot Do That The Nokia P Can

Here is a quick comparison article between the unnamed iPhone 8 but codenamed 'Ferrari' by Apple and the Nokia P by Nokia.

ZTE's Blade Z Max is a rare smartphone that combines all the excellent features and specs at an affordable rate.