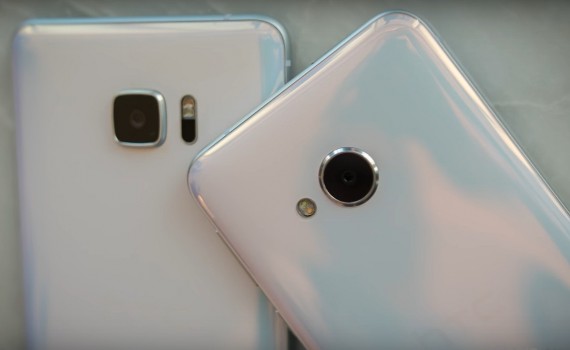 HTC has unveiled two high-end smartphones: namely the HTC U Play and the HTC U Ultra. These smartphones are the first mobile devices that have been formally introduced by the company under the 2017 HTC U line. (Photo : Android Authority/YouTube)

Yesterday, HTC has unveiled two smartphones for its 2017 HTC U series: the HTC U Play and the HTC U Ultra.

For both smartphones, HTC went beyond and completely changed its look with the casing design compared to its previous models. It is somewhat like a translucent piece of glass that is highly reflective and reflects just about anything that comes in front of it. Though it was glossy and shiny for my taste, it looked great nonetheless.

The source then further states that the secondary display do is that it is supposed to give more information rather than just your normal notifications, but also all the different reminders and notifications coming from the Assistant API that is supported by HTC's Sense Companion. The Sense Companion is reported to take the Google Assistant that is a feature available on Android Nougat and makes it function even better.

The HTC U Play is equipped with MediaTek's Helio P10 processor. It comes with 3 GB or 4 GB of RAM, depending on the built-in storage which is 32 GB and 64 GB. On the other hand, unlike the HTC U Play, the HTC U Ultra is powered by Qualcomm's Snapdragon 821 chipset. It comes with 4 GB of RAM and a built-in storage of either 64 GB or 128 GB. In regards with the expandability option, both smartphones have one via MicroSD.

What is this Ultra Pixel mode? Take the HTC U Ultra's 16 MP front camera for example. This Ultra Pixel mode combines the pixels and instead of having a 16 MP shot, it will be a 4 ultra-megapixel shot that will look great even in low light conditions.

For the battery, the HTC U Ultra houses a 3000 non-removable mAh battery. For its features, both smartphones still have the Boom Sound feature that is sure to give the device a high-performance sound quality, which also comes to the fact that neither smartphones feature a headphone jack. And for its availability, the HTC U Play will be available in select global markets only, while the HTC U Ultra is available for pre-order starting January 12, 2017.

HTC is reported to release or unveil 3 smartphones on January 12, 2017. The name of the smartphones are HTC Alpine (aka HTC U Play), HTC Ocean Note (aka HTC U Ultra), and HTC E66 (aka HTC X10). These rumored smartphones are said to be quite powerful and will most likely impress HTC fans and tech enthusiasts alike.

Here is a list of the best gaming phones that you should consider buying. Click to know all about it.