For Honor: This Character Will Be The Biggest Problem In The Game 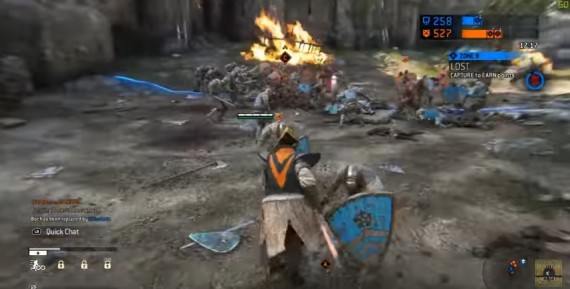 For Honor will be one of the biggest games Ubisoft will ever release. Its gameplay and storyline are awe-inspiring. They were again successful in introducing new dimensions in a video game. Nobushi, The Samurai is a must see character as it provides spectacular finishes in the game. (Photo : SurrealBeliefs/YouTube)

Finally, we were able to see a glimpse of what could be the best game Ubisoft has developed for this year. For Honor, the video game just released its beta version and we are honored to see it.

For Honor will easily be part of the top 10 games this 2017. It is a bold statement but, most of the people in the video game community already gave this game 9/10 rating. It is still too early to judge considering that we have only seen a beta version of the game. However, they have backed up all the hype that they’ve created months ago.

If you are fond of action-packed slashing online game, For Honor is the best fit game for your right now. This game was initially announced last 2015 at Electronic Entertainment Expo and we can now clearly see why it took them two years to produce it. The game will be available on major consoles such as PlayStation 4, Xbox One and PC. For Honor is not your ordinary game as it will introduce multiple aspect and dimensions that will make it a must play video game.

For Honor: Samurais, Knights, And Vikings

If we are not mistaken, this will be the very first game that will introduce 3 different race which is considered as major characters. The closest thing that we can consider with regards to having multiple race in a game will be Battle Realms. But For Honor is entirely different. The game can be played in multiple options. They can do it via 1v1 duels, story mode or campaign.

There are 3 different class with 3 distinctive warriors. All of them are highly capable of defeating other race. However, there’s a certain warrior that is now considered as the biggest problem to deal with. Before we proceed in revealing the character we are talking about. Let us check first the other characters.

Basing on the previous trailers and gameplay provided by some of the fans. Knights are very easy to use. Comparing them with the 3 characters or race, Knights are more systematic with regards to their movements. They have a certain sense of fluidity with their movements. The Vikings are a lot different. They are vicious, savage and their one goal is to hurt their opponents with massive blows. Their defense is not that good as well.

For Honor: Nobushi, The Samurai

Samurais are known as a master swordsman. They treat their sword as part of their body. They are more adept at offensive skills rather than defensive one. Their light armor gives them free will or freedom with regards to their movements. Their long edge staff is also a key for them to have a greater chance to attack first without getting hit. Among the 3 race, Nobushi or the Samurai are the fastest. As they say, fast/speed kills.

For those who haven’t ordered or tried the beta version of the game, you can check their website for more details.

Final Fantasy XV: Must Have Items Before The Carnival Ends

Final Fantasy XV Moogle Chocobo Event is about to end. However, players still have ample of time to at least get hold of some of the items that is very essential after the carnival.

Injustice 2: Robin Is Not Your Ordinary Sidekick, Gameplay Unleashed

Another character was revealed today by NetherRealm and this name doesn't need introduction, Robin. The teenage boy who used to be the sidekick of Batman is now a grown man. Now, he is ready to stand on his own.

Bandai Namco just released their epic trailer yesterday about Kazuya and Heihachi. Now, they just announced their very first DLC character in the name of Eliza.

Interestingly, a new update has been brought to For Honor thanks to Ubisoft. Check it out here!

Ubisoft has released a new set of Elite outfits in For Honor. Check them out!

'For Honor' Is Experiencing The Same Downfall With 'The Division'

Unfortunately for Ubisoft, "For Honor" player pool continues to decrease. Check out the full details here!