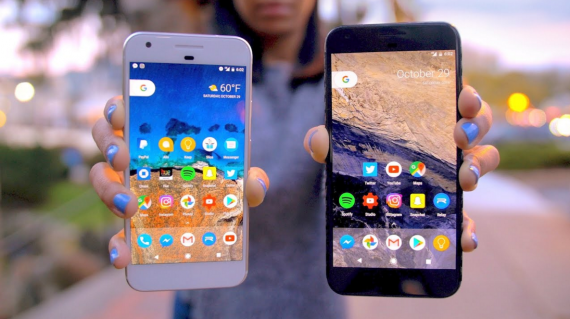 Last year, both tech giants Samsung and Apple released waterproof flagship smartphones with the Galaxy S7 and iPhone 7 series. Also, Google released a smartphone called as the Pixel and Pixel XL but not like Samsung's and Apple's, they don't have that waterproof feature. Today, a new report claims that Google smartphone successors, presumably called Pixel 2 and Pixel XL 2, will have a new waterproof design.

Stephen Hall, the Senior Editor of the fan blog 9to5Google, said on Twitter that "Little tidbit we were told in October last year that I forgot about: Waterproofing definitely coming with next Pixel device." According to Hall, this fact was something Google wanted to do on its original Pixel devices but instead, it prioritized the camera output. Now, Google decided to put enough time to make the phone waterproof as well.

If there has just been one feature lacking in every Google Pixel and Google Pixel XL, it is said to be the waterproof build. So it certainly seems plausible that Google would please its critics by adding the feature to the Pixel 2 and Pixel XL 2 in the fall. Also, it has been reported that Google wanted the first-generation Pixel and Pixel XL to be waterproof, but the feature was dropped because of the internal conflict between the camera hardware and/or waterproofing versus the price point.

As reported before, HTC silently builds the Pixel and Pixel XL for Google. But it's unclear whether the company has been commissioned to build the next smartphones under the series of both Pixel and Pixel XL. If that will not happen, Google may use its playbook for the Nexus series, which saw the company partner with various Android licensees such as Samsung, LG, Motorola as well as Huawei to manufacture its devices.

Back in 2016, Apple joined the waterproof smartphone devices with the release of the iPhone 7 and iPhone 7 Plus. LG is also expected to follow the thread by making its upcoming LG G6 waterproof. We can now expect to see Google "definitely" add the popular feature to its next-generation Pixel smartphones.

According to TechTimes, even though the lack of waterproofing is an issue for some people, both the Google Pixel and Pixel XL remain two of the most popular flagship smartphones on the market. Verizon, one of the Google's exclusive carrier partner, remains to be sold out of both Pixel and Pixel XL devices and it's showing that the shipping date of the devices will be on Feb. 14 and March 3, respectively.

Other Expected Features Of The Upcoming Google Pixels

The Samsung Galaxy S5 was released in 2014 and it was the first water-resistant smartphone to be released by Samsung. The feature was dropped the following year with the launch of the Samsung's very ownGalaxy S6 and S6 edge. But aside from the Google Pixel 2 and Google Pixel XL 2 having its new waterproof design, both of the two smartphones are said to be the new major Android challengers, as Samsung is getting ready for the release of its next flagship named as the Galaxy S8.

The two upcoming Google Pixel smartphones could each be fitted with 6 GB of RAM and a dual camera set-up. They could also feature a tri-camera technology and an OIS support for clearer and better quality pictures. Both the Google Pixel 2 and Pixel XL 2 may feature support for the second gen Daydream VR as well as water and dust resistance capabilities.

The Google-parent, Alphabet, reported having quarterly earnings that missed analysts' estimates on Thursday, as it gained less per click on its resources.

If you are waiting for the launch of Samsung's newest flagship phone, the Galaxy S8, you may have to wait for a little longer this time around.

Apple filed a second lawsuit against Qualcomm which accused the company of failing to live up to its promise made to license standard essential patents.

The rumor that the Pixel 2 and Pixel 2 XL could come with a Snapdragon 836 chip is now under attack.

The original Google Pixel was announced on October 4, 2016, and the new iteration of the series will arrive a year and a day later on October 5.

Here's The Latest Look Of Google Pixel 2 In Different Colors

3D renders about the Google Pixel 2 reveals on what the phone might look like in different hues.