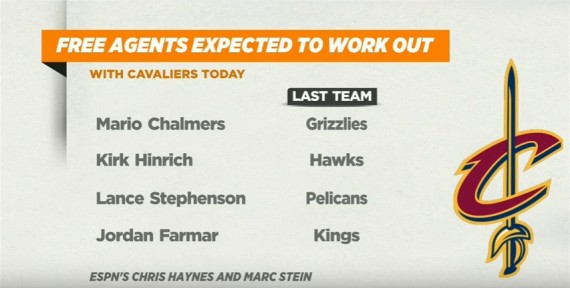 Cavaliers has been having a problem since the year started and LeBron James knows why. In his recent tirade he explain the need of having a backup point guard. Last Wednesday, the Cavs opened up a try out and there were a lot of NBA veterans that showed up. (Photo : NBALife / YouTube)

The Cleveland Cavaliers opened up the year 2017 with an awful record considering that they are the defending champions of the NBA. LeBron James lashes out their problem through various media stating that they need another point guard.

LeBron James, 4x NBA MVP, 3x NBA Champion and 3x NBA Finals MVP is now 32 years old. The King knows that his championship window will close sooner or later. With that said, The King wasted no time in sharing his thoughts on how to make his team, The Cleveland Cavaliers, much better. Although some don't agree with his approach, the message has been delivered.

By checking the Cavaliers lineup, LeBron James is right. There is no backup point guard or more specifically an experienced point guard who will lead the second group. Kay Felder has a promising college career and a decent rookie year but it is not enough if the Cavaliers is looking to defend the crown. The departure of Matthew Dellavedova did hurt the Cavaliers. He might not be an All-Star but he is a solid contributor whose effort cannot be disregarded.

LeBron James is the best player in the world for how many years and even with Superstars like Kyrie Irving and Kevin Love, they do need some help some from time to time. They consider the backup point guard position in their lineup as a thing to be concerned of. LeBron asking or voicing his opinion about the matter created havoc in the NBA world. Some of the fans and other NBA personalities thinks he’s a little bit whiny while other NBA legends like Shaquille O'Neal and Isiah Thomas understands The King.

Tyronn Lue, Team Manager David Griffin, Owner Dan Gilbert talked to LeBron James in a closed-door meeting. According to the reports, they were able to agree on certain things and will surely look for a backup point guard. Last Wednesday they held a workout for several NBA veterans who can solve The Cavaliers woes. Lance Stephenson, Kirk Hinrich, Mario Chalmers and Jordan Farmar showed up in the training facility. But who really fits the team perfectly?

The last time we saw the versatile guard from Brooklyn New York was with the Pelicans. Lance Stephenson a.k.a Born Ready is one of the guys that you don’t want to be his enemy but you wanted to be his teammate. He is a big guard and very tough. He had some issues with LeBron James in the past especially when they were battling in the playoffs. If Cavs needs toughness and ruthless aggression, Lance might be the best option.

One of the best collegiate star and steady point guard of NBA for how many years is trying to make a comeback. His last team was the Atlanta Hawks and due to ample of guards, they released Captain Kirk. He is very efficient with his shot and a good assist/turnover ratio guy. He might not be athletic or that explosive but he is capable of being a backup point guard.

Everybody knows that Mario Chalmers was the starting point guard for the Miami Heat when they captured the NBA title with LeBron James. He might have some attitude but he and LeBron had already established a relationship. Mario was actually doing great with the Memphis Grizzlies until he was struck with injury. Getting Mario will be very beneficial to Cavs as it will be easier to adjust for them since he and LeBron worked together before.

There are other names that were thrown by the NBA analyst and NBA legends. Names such as Rajon Rondo, Deron Williams, Jamal Crawford and Baron Davis.

Rihanna and Lebron James are surrounded with dating rumors after the pop singer came out strongly during the first game in the NBA Finals.