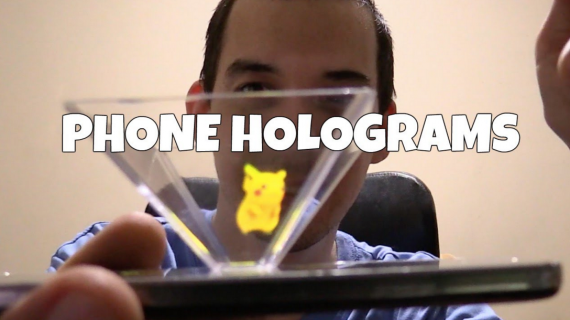 The company, 8i, is said to be looking to move forward on strategies on headset-based solutions and embrace phone-based augmented reality systems through the introduction of a new application called Holo. (Photo : Gadget Addict/YouTube)

Holographic-tech startup 8i has announced that it has raised a total of $27 million from media, tech and telecommunications strategic investors. The company is also unveiling its new application called Holo, a mobile augmented reality (AR) app that lets people manifest themselves with funny holograms. Time Warner led the round, and other investors such as Baidu, Hearst, Verizon, One Ventures, Seed & Speed and existing investors are on its way.

Holo: A High-End Holograms For Mobile

As reported by VentureBeat, the Holo app for mobile is currently in early beta testing on the Lenovo Phab2 Pro, which is Google’s first Tango-enabled device. 8i plans to launch this new Holo app later in 2017 with key content partnerships a well as programming. “As consumers are augmenting, mixing, and creating new content on their smartphones on a massive scale, mobile presents an unparalleled opportunity for distribution of holograms,” 8i CEO Steve Raymond said.

Raymond also said in an interview that Holo would very likely be launching on devices with more basic camera configurations in the future. As of now, the most limiting factor for 8i in terms of its growth is the amount of technical heavy-lifting required to create a high-end hologram. Almost all the company’s high-quality stitches come from studio-grade setups that are both large and quite complicated.

The company has been focusing on strategies on headset-based solutions. Not until 8i plans to move forward and embrace phone-based AR systems through the introduction of a new application called Holo. This application is believed to allow users to place some of 8i’s volumetrically captured holograms into their own. Raymond also said that the company is thrilled to have the strategic expertise and backing of leaders in media, technology and communications as they bring audiences optional ways to create and engage with different content.

8i is showing off Holo, as an application which gives people an easy way to mix the content of the real world with holograms of their favorite characters, celebrities, brands and other well-known people. The Holo app lets the users to add holograms to their real-world environments as well as to take videos and photos that they can share with other users across their social networks and messaging apps. “With VR and AR, we’re seeing the very beginning of a new generation of immersive media,” Scott Levine, Time Warner Investments managing director.

According to TechCrunch, the company is announcing today that it has closed a $27 million deal with Time Warner investments. This collaboration is with the participation from Baidu Ventures, Hearst Ventures, Verizon Ventures, One Ventures, Seen & Speed Ventures and some of the firm’s previous investors. 8i’s new app will be launching later this year on Google Tango-compatible devices.

This is notably the first outside investment in AR/VR coming from Baidu, the Chinese search giant that has been increasingly directing internal resources to consumer AR/VR. This past August, the company launched its own AR smartphone platform which is called as the DuSee, and just last month, Baidu opened an AR research lab and began directly integrating AR tech into its popular suite of apps.

Aside from the expected feature of having up to 16 gigabytes of RAM, Microsoft Surface Pro 5 could also possibly feature the next-generation rechargeable Surface Pen and support for the Surface Dial.

Verizon And T-Mobile Tied For The Best Wireless Networks

Previously, Verizon was the only number one and the undisputable mobile network carrier. Not until when OpenSignal reported that Verizon either won or shared every national prize with T-Mobile.

The LG G6 is rumored to have the new 32bit Hi-Fi Quad DAC which will control both the left and right sound channels of the device as well as reduce static noise.

KFC customers of a China branch can order without talking with the help of Baidu's facial recognition tech which guesses their orders by analyzing facial expressions, age, gender, and mood.