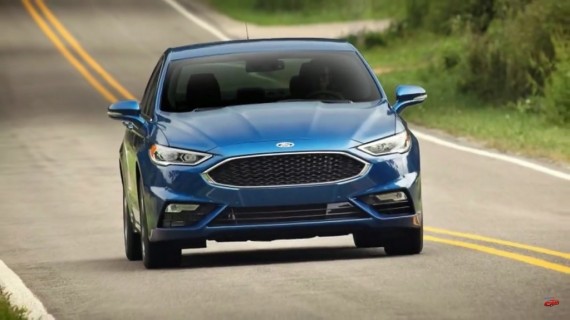 The 2017 Ford Fusion brings back excitement as the fastest in the midsize sedan segment. (Photo : Supercars Hotnews/YouTube)

Now here's the deal, Motor Trend reported that the 2017 Ford Fusion is powered by a 2.7-liter twin-turbo EcoBoost V6 engine that delivers 325 horsepower and 380 pound-feet of torque. However, there is a catch as you will need to put in 93 octane gasoline for the 2017 Ford Fusion to produce that output. This is quite a drawback if you are from California as the usual gas available in this state is 91 octane.

The 2017 Ford Fusion's powertrain is paired with a six-speed automatic transmission that delivers the power through an all-wheel drive (AWD) setting. In addition, you will also find standard paddle shifters mounted on the steering wheel. The 2017 Ford Fusion, regardless of whether you can put in 93 octane gasoline in it or not, will most definitely still give you a very exciting driving experience. The 2017 Ford Fusion can go from zero to 60 miles per hour in just 5.4 seconds and yes, that is faster than basically any of its midsize sedan rivals.

Dodge Viper: The Legend Is Finally Bidding Its Farewell

It was a wonderful 25-year long journey but Dodge Viper is finally saying goodbye.

Chevrolet delivers the promised 50 mpg range with its 2017 Cruze Diesel.

2017 Honda CR-V: Why It Has The ‘Best Compact SUV For The Money’ Title

The 2017 Honda CR-V offers quality like no other compact SUV in the segment.