Here's Why You Shouldn't Play As Jungler In Mobile Legends 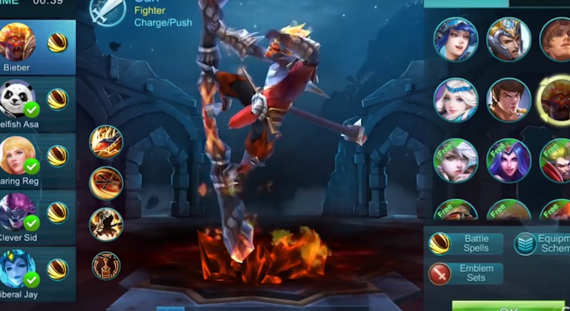 Players often confuse Mobile Legends with the popular MOBA titles like Dota 2 and League of Legends. One distinctive contrast between the former from the latter is that this app doesn't offer much room for junglers. Here's why. (Photo : Ask VeLL/Youtube)

One of the newest gaming apps, Mobile Legends is growing in an immense popularity especially for competitive players wanting to experience thrill and excitement on the go. The app was developed by Moonton and it provides striking similarities to the renowned MOBA game, League of Legends. But aside from the similarities between its game design and graphics, players shouldn't be confused between the two as Mobile Legends offer a distinct flavor and pace to its fans.

Mobile Legends vs League of Legends

A large portion of Mobile Legends' community are competitive players that came from either Dota or League of Legends and as such, accompanying most of their games' traditional strategies on the app. The problem, however, is that although the app resembles the iconic MOBA titles, the classic strategies of the former aren't as effective when applied to the latter. This is because, Mobile Legends' pace is a lot faster, with games lasting for around 10 minutes only.

One of the concurrent issues in Mobile Legends is the junglers. In LoL and Dota, junglers play a huge role in the game - offering support on all lanes and providing ganks against unsuspecting enemies. In this app, however, junglers are more of a drag than of a help. Here are the reasons why:

The main aspect of the game revolves around destroying the enemy team's base and in the current meta, it all boils down to killing enemy heroes and stomping their base with a huge push. With how fast the game's pace flows, for the most part, the team that dominates on the lanes, wins the game.

This is where the problems with a jungler then follow. For the most part, going into the jungle full time will leave a lane 1v2 in favor of the enemy team. Although there are some heroes that can sustain against two enemy heroes, that lane is still at the disadvantage. First, the enemy team will have more success of pushing and destroying the tower and second, the hero playing solo on the lane is likely to have lesser farm and be much less effective in the later part of the game.

Farming is crucial in both LoL and Dota and this, too, holds true in Mobile Legends. The only difference is that full-time junglers aren't as much farmed as those that are free farming at lanes. Furthermore, there are a lot of instances where junglers do not take the Retribution spell and/or a jungle item which makes a huge difference during the early stage.

Also, cores can accelerate their farm (or recover once they lost their lane) upon clearing the camps on the jungle. This option wouldn't be available if there's a jungler in their team since that hero would definitely be clearing all the camps available.

While junglers can offer help through surprise ganks, the current meta doesn't offer much room for junglers to shine. Until future balance updates have been made, it's a lot better for players to stick with their lanes rather than to play full-time jungler as it's wiser to fight enemies head-on rather than leaving a lone teammate on a lane against two enemies.

League Of Legends: Everything You Need To Know About Patch 7.1

Junglers will now have a hard time dominating the early stages of the game.

Here's why Modekaiser isn't dealing as much damage as it should be.

League Of Legends: How High Elo Players Deal Against Yasou

Do you find it hard to deal against a fat Yasou? Well fear not as the champion is not entirely broken contrary to popular notion. Here's how you can effectively deal against Yasou both in low and high Elo matches

The International 2017 is likely to be moved outside of the US as US president Donald Trump's travel ban has affected Valve and its Major events.