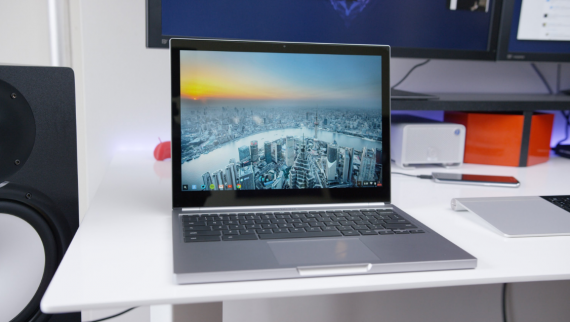 It is not yet clear if the "Quick Unlock" feature in Chromebook would also support USB scanners or users would have to wait for a new lineup that comes equipped with a biometric scanner. (Photo : Marques Brownlee / YouTube)

Google has extended another feature to its Chrome OS which brings it to the 58.0.3007.0 version. If you are one of the million of Chromebook owners, expect that later this year, you Chromebook will be able to unlock their laptops using their fingerprint. Recently, Chrome Story spotted a new feature in Chrome OS Canary that explains “Quick Unlock (Fingerprint).”

Chromebooks will soon to have a new feature that will make it like an Apple iPhone. According to WCCFTech, this new feature to debut on Chrome OS desktop later this year has the ability to unlock the Chromebook with the user's fingerprint. This new innovation is named as the “Quick Unlock” feature.

All owners of Chromebook with the biometric hardware support can now activate and use the new feature. Just go to chrome://flags, by entering the desired option, the owner can set up his/her Chromebook and can register the maximum of 5 fingerprints. An alternative way is heading to the Settings menu, then choose Screen Lock to instantly enable fingerprint scanner for locked screen. Chrome Story also reported that the new feature is currently available on Chrome OS Canary build.

As of today, it is not yet clear if Google's Quick Unlock feature in Chromebooks would support third-party peripheral as well or users still have to wait for a new lineup that comes with a biometric scanner. As reported by PCWorld, it would be a good news if it will be supported both by the internal and external hardware. Note a few months ago, Google also introduced the PIN unlocking feature for the Chromebook.

This feature has not been celebrated by Google so far despite the fact that it already had its unofficial availability since February 14 of this year. However, as reported, the actual release of Chrome 58, which is the Quick Unlock feature, will be in April. Aside from the fingerprint scanner, Google will also provide better stability as well as more unionized release across all Chromebooks.

Before the "Quick Unlock" feature, Google also introduced in 2015 the function of allowing the user to use Bluetooth authentication through a smartphone. This opens up the opportunity for Google ChromeOS fingerprint technology to provide for other security features. This includes the online payments through owner's fingerprint verification as well as multiple authentications, among other things.

Now that the operating system has gotten the ability to include Quick Unlock fingerprint scanning, it is difficult to say how the current Chromebooks will be able to support the new feature. Whether any compatible externals will be available or not has not been unveiled yet. Hopefully, Chromebook makers already have gotten their individual memo about this soon enough.

Chrome OS TO Take Down MacOS, iOS, And Windows

As Chrome OS already unleashed the new fingerprint scanner feature, reporters claimed that it is now definitely competing with its rivals which include the MacOS, iOS, Windows and others. Apple first introduced a similar feature for its MacBook Pro 2016 series with the so-called Touch ID authentication. Although Google did integrate fingerprint scanner in its smartphone devices, it never extended the similar feature to its Chromebook lineup. However, there are also reports about the upcoming successor of the Chromebook Pixel.