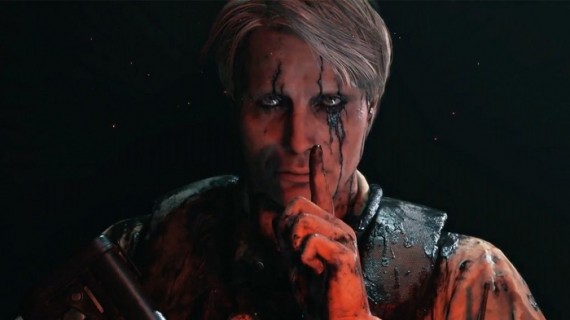 Death Stranding is probably one of the most highly anticipated games in the industry today. Being developed by Hideo Kojima (yes, that guy!), it stars The Walking Dead actor Norman Reedus (whom can be seen in the game's first trailer). And now, a more star-studded cast has been added courtesy of the second trailer. These are in the form of the critically acclaimed veteran director Guillermo del Toro and the amiable villain from Hannibal, Mads Mikkelsen.

In the latest trailer for the game (video embedded below), it teased what appears to be a Decima logo. The latter, as what many speculated, is the new engine the developers are using to create the title. Well, this is actually true, following the PlayStation Experience livestream Kojima conducted.

While it's true that del Toro (famously known for Pan's Labyrinth and Pacific Rim, among others) is part of the second Death Stranding teaser, he wasn't actually the guy who performed on the footage. However, both Reedus and Mikkelsen are confirmed to be main guys of the forthcoming video game.

According to GamesRadar, the award winning video game designer asked the director if he can perform. Though the latter agreed, performing the actual CGI didn't happen. Instead, the developers obtained multiple 3D scans of the del Toro's face, hands and expressions. Kojima explained that as much as he wants to, he can't simply take so much of del Toro's time considering he's stuck in various movies.

It's also worth noting that before the release of the first Death Stranding trailer at E3, Kojima already pointed out that everything is running on real time. And yes, it's true and add to that the fact that it's on a PS4 Pro. Simply put, one can't suggest that it's pre-rendered or something. It seems the titular guy in the gaming industry knows how to excite people.

Going back to the game's engine Decima, this one here is actually related to Horizon Zero Dawn. Why? That's because it's the same engine that Guerilla Games is using for the said title. As a matter of the fact, it's the same kind of engine that the studio has been using on all of its games, only it's being evolved from time to time. Aside from AI, it also offers physics and stuff.

Kojima revealed that prior to conducting any meetings with Guerilla Games, he was already given a box that contained all the source code for the aforementioned engine. And viola, it gave birth to Death Stranding. He even called Herman Hulst, the managing director of the aforesaid studio, "insane." With that being said, it's safe to say that both Guerilla Games and Kojima Productions are working hand in hand in developing the title.

As of this writing, it remains a mystery as to when the upcoming game will be released. Heck, nothing has even been revealed about its entirety. From storyline to plot to gameplay, these are kept under wraps. But of course, fans do know that Reedus and Mikkelsen will be part of it.

What are your thoughts on Death Stranding? What kind of game do you think will it be? What are your expectations? Be sure to let us know what you're thinking at the comment section below!

Do you want to work your way into the Overwatch Season 3 Competitive Play rankings? Check out this guide!

Wondering how to open the vault doors or complete the Pitioss Ruins Dungeon in Final Fantasy 15? Check this out!

Clash Of Clans Is Getting A Gem-All-You-Want Event?

Well, it seems the rumored free gem mining will be happening to Clash of Clans soon. Check it out here!

Sony Exec Gets To Play Death Stranding; Says He 'Couldn't Explain' It

Luckily for the Sony executive, he had the chance to experience Death Stranding. Check out the full details here!

Hideo Kojima surprised fans with a tweet informing them that Death Stranding will be absent at E3 2017.

Previously, an image was leaked online which is suspected to be Emma Stone's character in Death Stranding. However, it has been made clear that the photo was fake.