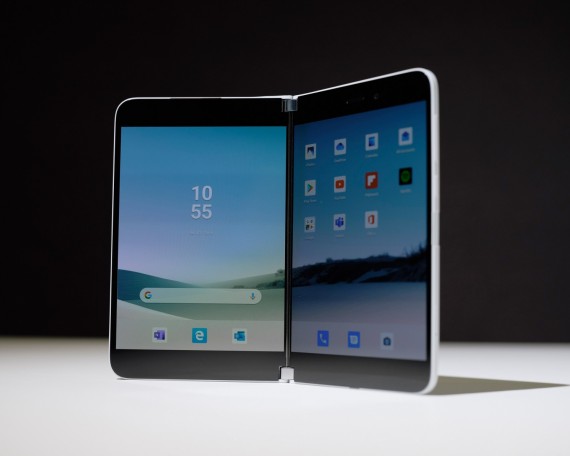 Microsoft surprised its followers with the announcement of Surface Duo, a foldable smartphone with two side-by-side screens. (Photo : Ian Bates/WIRED)

Fans and followers of one of the biggest tech companies in the world, Microsoft, were surprised by the announcement of the company's new device: a foldable, two-screened smartphone known as the Surface Duo. The announcement was made on Wednesday, October 2, in Microsoft's Surface event held in New York City.

Surface Duo includes two side-by-side displays which are connected by a 360-degree hinge. Each screen is 5.6 inches. When folded, the device can easily fit into your pockets. But when fully unfolded, it becomes an 8.3-inch tablet.

The smartphone has almost the same design as Surface Neo, a foldable tablet from the company. But, Surface Duo will be smaller.

Surface Duo will be powered by Snapdragon 855 as reported by Wired. Microsoft has also partnered with Google, so the smartphone runs on an Android OS. Although the company has tried to create operating systems for smartphones, it was impossible to compete with Google's Android and Apple's iOS systems.

Still, it incorporates the elements of Microsoft 10X, the OS for hybrid phones. Surface Neo will also run on Microsoft 10X.

This hybrid foldable smartphone can run two different apps on each display simultaneously, which makes it perfect for multi-tasking. Gamers can also appreciate this phone. You can open it up and turn the second display as a game controller or a keyboard.

Surface Duo is Microsoft's newest smartphone which will run on Android as company partners with Google.

Today we shared where Surface and Microsoft are...and where we're going. I hope you liked the products. We can't wait to see what you do with them #MicrosoftEvent #SurfacePro7 #SurfaceLaptop3 #SurfaceEarbuds #SurfaceNeo #SurfaceDuo pic.twitter.com/UIoW8SDPNN — Panos Panay (@panos_panay) October 2, 2019

The second display can also be turned into a stand so users can watch videos in landscape.

"You can text, you can write, you can do what you want," said Microsoft chief product officer Panos Panay.

Despite the announcement from Microsoft, there are no other details surrounding the foldable phone. But, like other Surface devices, it will be launched later in 2020.

According to Forbes, one of the reasons Surface Duo could be successful is its hybrid element.

Microsoft's attempt at creating OS systems for their previous phones did not work out. But since it is running on Android, the experience and service will be better. Additionally, there won't be any more debate as to whether Microsoft Store has enough apps since Google's Play Store has 2.8 million apps.

Another reason why they might succeed is the phone's features. Forbes believes that Microsoft's foldable design is different enough to attract smartphone lovers.

Samsung has already launched Samsung Galaxy Fold, and Huawei has the Huawei Mate X. Although Surface Duo wasn't the first foldable smartphone to come out, it does give Microsoft an edge as a new competitor.

The details are still incomplete so it's not easy to predict how well Microsoft's Surface Duo will do. The camera specs and security features haven't been announced yet as well as the exact price and launch date. But we can expect it to roll out in time for the holidays next year.

Most of these Surface devices, except for the Surface Neo and Surface Duo, are available for pre-order now.