Instagram has rolled out a brand new feature on the app that aims to prevent cyber bullying.

The new feature called Restrict can help you restrict comments from a user without them knowing it. By using this tool, nasty comments and other forms of harassment from an Instagram account will be banned and won't be seen by you and your followers.

Since you can stealthily ban some accounts, the process has also been called "shadow banning."

Instagram's newest feature was launched on Wednesday, October 2, as part of the app's way to prevent any form of bullying. According to Instagram, Restrict is a way to empower bullied victims by quietly protecting themselves.

Online bullying has been extremely rampant, especially on social media like Instagram. Based on a 2018 survey conducted by the Pew Research Center, 59% of US teens have been harassed and bullied online. There have also been several cases of teens killing themselves due to relentless bullying.

In fact, another case of bullying has left a family mourning when a teen shot himself dead just this September. According to a report by WZTV, 16-year-old Channing Smith was outed by two other teens on social media. Smith was left "very upset" and "very shaken" that he took his own life.

Although most social network platforms allow you to block other users, many are reluctant to do so in fear of reprisal.

Restrict does more than just hiding the bully's comments. Once you have shadow-banned a user, they won't be able to see whether you are online or not.

Additionally, their direct messages will be directly sent to your Message Request inbox, and the app won't notify you of them. Plus, they won't see whether you have seen or read their messages or not so you can have extra peace of mind.

Restricting a comment and user is simple. You only need to swipe left on a comment and choose "Restrict." Then, a pop up will appear and the user can then confirm the action. Once done, the account will be free of harassing and nasty comments. 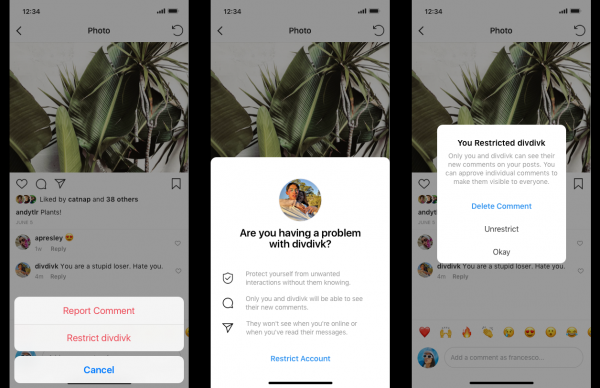 (Photo : Instagram)
Instagram has launched the Restrict feature that aims to help fight cyberbullying. It can be done by swiping left on a comment and confirming the action.

Instagram has launched the Restrict feature in an effort to help fight cyber bullying. It can be done by swiping left on a comment and confirming the action.

Undoing the action is also possible. However, their comments will be visible again, and you'll be notified when they message you privately on the app.

The Restrict feature was first tested on a small pool of Instagram users last July. But it is now available for the general public.

It is not the first time Instagram has stepped up to help prevent cyber bullying. Instagram head Adam Mosseri pledged to continue fighting cyber bullying as they believe it is their "responsibility to create a safer environment."

Apart from creating a better experience, the company has also met up with teens and their parents to gather more information about online bullying and harassment.

Besides Instagram, its parent company, Facebook, has also been experimenting with ways to make the environment less toxic, according to CNN.

The social media giant has tried several tests, such as hiding likes on both Facebook and Instagram. It aims to reduce the pressure to get more likes, as well as help stop account owners from comparing themselves to other people.