NASA has unveiled the new high-tech spacesuits for the upcoming Artemis mission that aims to send people on the moon to create a long-term base there and then to send a crewed mission for the first time to Mars.

The unveiling of the new spacesuits happened on Tuesday, October 15, during a presentation at the NASA headquarters located in Washington, D.C, and led by NASA Administrator Jim Bridenstine.

The spacesuit was named the Exploration Extravehicular Mobility Unit, or the xEMU suit, according to Digital Trends. 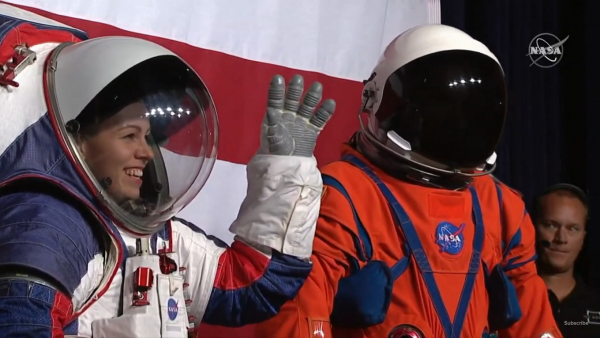 It was specially designed for the challenging mission ahead, and protect astronauts from various harsh conditions such as temperatures that range from minus 250 degrees to plus 250 degrees Fahrenheit, which can help our astronauts during their mission to the moon's south pole.

It is also designed to keep moon dust from infiltrating the life support system of the suits and keep our astronauts safer.

Additionally, the new spacesuit also allows better mobility, enabling the wearer to cross their arms and raise it over their heads, unlike the previous design of the spacesuit.

During the presentation, an engineer wore the suit and demonstrated how the suit offers freer movements by bending to the ground, picking up a stone, and passing it on to a colleague.

The complicated movement was made possible by the bearings on the waist and the lower half of the suit, which did not exist during the previous spacesuit model and constraining astronauts of doing several movements.

With the new design, performing more delicate tasks and maintenance is easier for astronauts.

Besides the xEMU, CBS News reported that another suit was presented, which was known as the Orion Crew Survival System, which looked similar to the pressure suits worn by astronauts during launch and landing.

But like the new suits, the new Orion Crew Survival System had several improvements and customizations that suits the astronaut's needs when aboard the Orion capsules, and will be worn during launch on top of NASA's New Space Launch System or SLS, and during the capsule's fiery re-entry to the Earth by the end of the mission.

Both suits can also accommodate a broader range of sizes compared to the current range of suits aboard the International Space Station.

The new and improved spacesuits were designed by a team of NASA experts, led by senior spacesuit engineer Amy Ross, who is the daughter of Jerry Ross, the veteran shuttle spacewalker.

According to CNN, the new suits will have to undergo testing first on the ISS before they can be used for the Artemis missions so that NASA will have more idea of how the suits work on zero gravity while astronauts are conducting basic and science operations.

The Artemis missions aim to bring the first woman and the next man on the Moon by 2024.

NASA will be sending two missions around the Moon first to test the agency's deep space exploration systems, with Artemis 1 launching in 2020, the Artemis 2 missions in 2022, and the manned Artemis 3 missions starting in 2024, with more astronauts landing on the Moon around once a year after that.