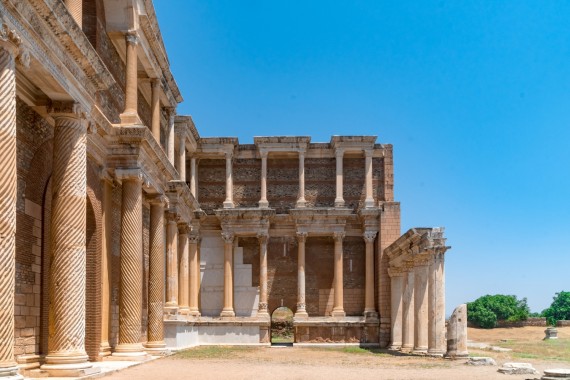 Herodotus, the famous Greek historian that wrote extensively on the Lydian Empire once shared, "The land of Lydia has no great store of wonderful marvels, compared with other lands [but] there is one monument to be seen there which is larger than any other except only those in Egypt and Babylon: for there is the tomb of Alyattes..."

The tomb of King Alyattes, the father of fabled King Croesus, was the largest burial mound in the ancient world and remains one of the largest still today. Standing at just over 200 ft. tall and 1,160 ft. in diameter, the tumulus of King Alyattes is an imposing anchor for the Bin Tepe burial field, possibly the largest tumulus burial grounds in the world. Rory Brown, Managing Partner of Nicklaus Brown & Co., shares details about the tumuli of the Lydian royal cemetery at Bin Tepe.

The Bin Tepe tumuli, scattered out across the land north of the ancient Lydian capital of Sardis, create a haunting spectacle that's unmatched in the region. It's unclear exactly how many burial mounds existed in antiquity, but by the 1940s, when exploration of the more massive tumuli began in earnest, there were 149 mounds. Today only 115 remain, the rest destroyed by agriculture.

The mounds were the final resting places for wealthy members of Lydian society. The largest tumuli were reserved for members of the royal family.

Each was constructed in roughly the same manner. The outer edge of the mound was defined by a low crepis wall made of several courses of large limestone blocks. This helped retain the earth fill that was mounded on top of the inner chamber containing the deceased's remains.

These inner chambers were frequently located significantly off-center, at a random point within the mound in order to frustrate the efforts of graverobbers.

The largest of the Bin Tepe tumuli is Koca Mutaf, determined with a high degree of certainty to be the burial place of King Alyattes, built with his son Croesus's enormous wealth. It's estimated that it took nearly 2,500 men and 600 pack animals two and a half years to complete the mound, which contains nearly 28 million cubic feet of earth mounded over its inner chamber.

This chamber had already been plundered when it was discovered in the mid-19th century. While the sarcophagus had been removed, explorers were still treated to an imposing inner room composed of massive limestone blocks and solid, 16-ton limestone roofbeams engineered to support the massive dirt load pilled above them.

Karniyarik is the second largest of the three major tumuli that crest the main ridge in Bin Tepe. It's not certain who was buried there. However, some evidence points to this tumulus as the final resting place of King Gyges, the founder of Lydia's Mermnad dynasty, the line of rulers that eventually ended when the Persian army defeated King Croesus.

The most interesting feature of the Karniyarik Tepe is a crepis wall buried within the mound. This indicates that the large tumulus we see today is an expansion of an earlier, smaller tumulus. For reasons unknown, the builders of the expanded mound opted to bury the earlier outer wall rather than repurpose the stone elsewhere.

Karniyarik is also unique in that an inner chamber has never been found, despite extensive tunneling and coring expeditions. Teams even found old tunnels built by ancient Romans, but the fact that they'd been backfilled indicated they hadn't found a chamber either.

About: Mr. Rory Brown is a Managing Partner of Nicklaus Brown & Co., the Chairman of Goods & Services, Nearshore Technology Company, and a member of the board of directors of Desano. He is passionate about delving into the history of money and how our modern currency has evolved into what it is today. In his spare time, he writes about the history of the Lydians - the first civilization to use gold and silver coinage.