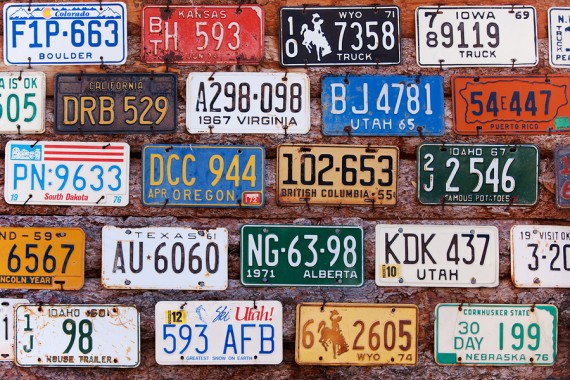 The First License Plates Were Homemade

New York was the first state to require license plates, beginning in 1901. However, the state required that owners produce and display their plates. Owners were required to make a plate with the owner's initials to show who owned the automobile being operated on a public roadway. There weren't very many cars on the road yet in 1901, and most owners made their plates out of wood or leather, often using house numbers riveted on.

Massachusetts Was the First State to Issue License Plates

Massachusetts began issuing license plates in 1903. The first plates displayed numbers in sequence beginning with plate number "1," and the plates grew wider as the number of registered vehicles grew into the hundreds and then thousands. Those first state plates were made of iron and covered with porcelain enamel. Other states quickly began requiring state-issued license plates, and by 1918 all states had officially issued plates.

Delaware has been using the same basic license plate design since 1959, with only minor cosmetic changes. Delaware's "First State" design is one of the more collectible license plates in the U.S. Delaware even allows current owners of plates issued since 1942 to continue using their license plate with current year registration stickers. To say that Delaware motorists are "plate obsessed" would be the understatement of the century! The state allows plates with low number to be publicly auctioned with someone, with two- and three-digit numbers bringing enormous amounts.

Metals of all kinds were in immediate demand by the government during World War II in order to supply the military with much-needed weapons, vehicles, and other wartime necessities. Therefore, states used windshield decals or cardboard, fiberboard, and even pressed sugar cane for license plates while the war effort drove metal production away from domestic uses. Many World War II-era plates are valuable because their materials were not as durable as traditional metal plates, which of course, means they are harder to find in good condition today.

In 1979, a California man with the vanity plate "NO PLATE" received over 2,500 citations. Many officers issued citations for vehicles without a license plate showing "NO PLATE" as the owner, leading to thousands of errant citations. After many of the citations were successfully contested, the state finally issued a directive to officers to simply use "NONE" instead.

Michael Wiener of Albuquerque New Mexico is a world-renowned license plate expert, collector, researcher, and consultant. He is among America's leading authorities regarding automobile license plates and motor vehicle licensing systems. Mr. Wiener has served as an Albuquerque City Councilor, a New Mexico State Senator, and a Bernalillo County, New Mexico, Commissioner. He has served as President of the Automobile License Plate Collectors Association, and has been featured on HGTV's Offbeat America," CNBC News With Brian Williams, and appeared in an episode of AMC's Breaking Bad. Mr. Wiener was the editor of "The License Plate Book" for over a decade and created New Mexico's Diamond Jubilee 75th Anniversary commemorative official front license plate series. Michael serves as a consultant for motor vehicle departments, law enforcement agencies, and television and motion picture producers on subjects related to motor vehicles and automobile plate history.