Instead of doing the regular April Fools' Day gimmick, Google has decided that it would not be doing this usual gimmick and instead, the company has chosen to celebrate the life of Dame Jean Macnamara who is a tireless polio researcher. 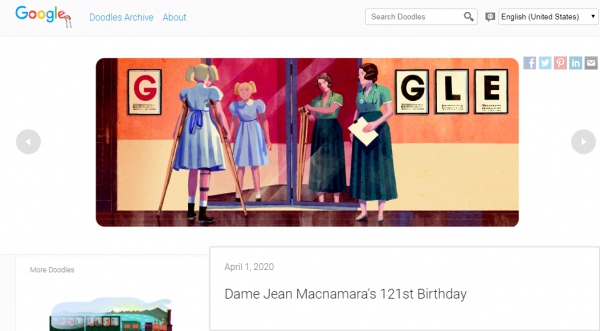 Instead of the company's homepage being a fun way to celebrate April Fools' Day or another usual gimmick, Google Doodle has decided to honor the polio doctor. This celebrates the 121st birthday of Dame Jean Macnamara.

Who exactly is Dame Jean Macnamara

On this very day way back 1899, Annie Jean Macnamara (who would later on be given the formal title "Dame") was born all the way in Victoria, Australia. Macnamara then graduated medical school when she was 23 years old and then joined the Royal Children's Hospital one year later. Macnamara then arrived just before the polio outbreak happened.

Macnamara was able to witness firsthand the devastating effects of the poliovirus on children which then inspired her to put in significant work in order to find a vaccine for this polio! Her discovery was even more fruitful as she discovered that there was more than just one strain of this virus.

The efforts put in by Jean Macnamara had made a direct impact to the development of the very first polio vaccine in 1955 which ultimately earned her the esteemed award of Dame Commander of the royal Order of the British Empire.

The doodle in itself shows Dame Jean Macnamara working directly amongst children in order to give them hope that one day, they would be able to walk without crutches! The two sides of the mirror were used to symbolize the before and after scenario.

Thomas Campi was the artist behind this doodle of Dame Jean Macnamara and he shared in an article with 9TO5Google just how he felt as an artist to have Google itself commission a piece from him. Thomas Campi was first in disbelief when he received the email in a thorough explanation he gave.

Read Also: The Potato Microsoft Teams Mishap: Hilarious Boss Can't Get Rid of Her Filter During a Video Meeting!

How did Thomas Campi feel about his artwork being commissioned?

"Honestly, my first reaction was, 'Google's people asking me to work for them? I need to check this email and names to be sure it's all real!'" which was then followed up with him explaining that he has personally been seeing Google Doodles for quite a long time and that he thought that it would be a cool project to make.

"All the images I've seen so far are just wonderful. Now I can be part of this, and it's a nice feeling for an artist." Were the words used by Thomas Campi to express just how honored he felt to have his artwork commissioned by none other than Google Doodle itself!

Despite April Fools' Day, Google Doodle has decided to share a little light by honoring the life of Dame Jean Macnamara.

Simple Google Doodle Games to Play While Passing the Time: Doodle the Coronavirus Away!

Google Doodle will be releasing a series of mini-games to keep people from getting bored. Doodle the coronavirus away!