A series of videos have been released on YouTube in order to educate people on what it looks like driving on the moon, Jupiter, and other planets compared to earth! This educational video is a great way for those curious minds to be satisfied as the video shows an animation of the bumpy ride. 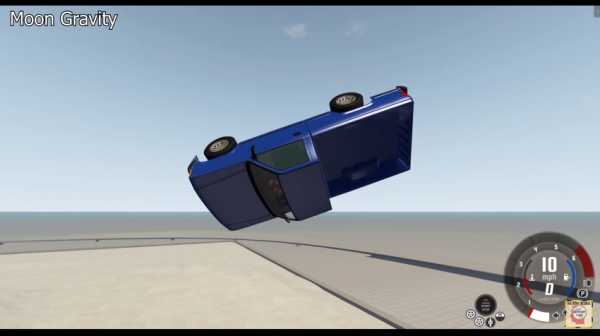 People have had a fascination with the great unknown ever since we discovered we were not the only planet out there and that the whole galaxy around us is huge! Well, here's a way to satisfy your curious mind by finding out what it looks like to drive around in different planets.

The specific YouTube science channel known as The Action Lab had a great fun idea and this was to use the existing physics heavy driving simulator known as BeamNG.drive for them to show just what exactly would it look like to drive on different heavenly bodies.

To be able to measure the differences, the first video to watch is of the earth as it shows you what driving looks like on a level of gravity which we are all used to. The video is not too exciting since the movements of the vehicle can sort of be predicted since we have seen these types of movements before from either movies or real life

The simulation starts to get even more interesting as the next video shows what gravity looks like on the moon! The tractions are even more difficult now and a little more complication is now added to the way the vehicle is driving around on the moon.

The YouTube channel finally goes deeper into space flipping right into Jupiter's gravity which in turn immediately crushed this simulation truck into the ground. It is interestingly educational as the viewers can see just how different levels of gravity can affect the functions of vehicles and how they drive.

Well, the YouTube channel does not stop until things get more extreme! The video definitely goes off the rails when the gravity of the Sun is added to the picture instantly crushing the specific test vehicle! This is an interesting sight to see since most people do not keep in mind the gravity level of the sun itself.

The YouTube channel has an interesting and entertaining way of educating the masses by trying out a whole bunch of different parameters even including lifting the truck up and then dropping the truck with various gravity settings!

The effects of gravity have not really been a subject of interest for most people but hopefully with the help of these videos, the YouTube channel known as The Action Lab can help not just kids but also curious individuals from around the world learn another thing or two about space, gravity, and science in general!