TikTok, Facebook, Instagram has been all over this new dalgona coffee challenge and a lot of people have been sending in your entries but a huge question still puzzles most people on social media, "what is dalgona coffee?" and also "how to make dalgona coffee?" 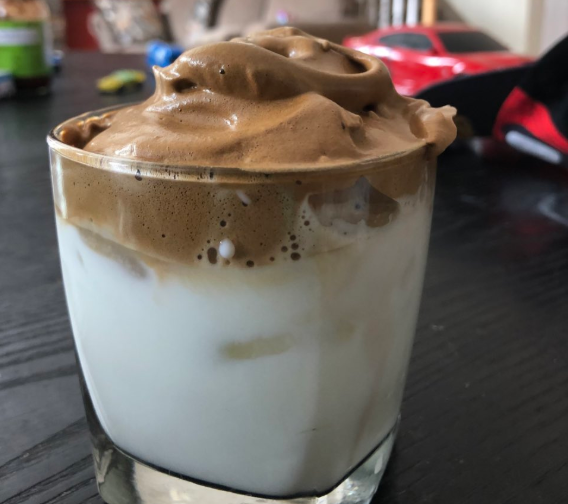 Dalgona or ppopgi is a Korean drink that means "honeycomb toffee" and has been evoking strong memories for Koreans so if you see this drink online, you can best relate this to the popular boba tea!

How to make dalgona coffee?

If you were ever wondering how to make dalgona coffee, here's how to make it in a few single steps.

The first thing you need to do is to mix two tablespoons of instant coffee or even expresso powder along with two tablespoons of sugar and also two table spoons of very hot water. Some people even usa a hand mixer while others would prefer using a spoon.

The second thing to do would be to stir this concoction constantly until it transforms from the original brown to beige and also takes on a more thick and foamy texture.

The third step is simple, all you have to do is to spoon the mixture on top of a glass of either hot or cold milk. Voila! Here's how to make a simple dalgona coffee.

The history of this dalgona coffee

This simple but exciting treat became very popular in South Korea at around the 1970s until the 1980s way before the American fast-food chain McDonalds has ever opened in the coutry in 1988. Certain people have said that this drink was created a little after the Korean War (1950-1953) during the time when the United States Army personnel started to give out confectionary to local children.

The parents of the children who have received this confectionary were quite unable to spare money for these specific treats which is why they started doing their own versions.

Dalgona is created by mixing sugar along with water and boiling this combination until it turns slightly yellow. Baking soda is then added after the mixture breaks down and the carbon dioxide is released! The liquidized sugar puffs are then hardened becoming both light and crunchy!

The use of social media

View this post on Instagram
Today, I made a coffee with 400 times whips️‍️ I will share my Korea story in this video, so stay tune see you soon on youtube! Stay safe everyone! Muah-! - #dalgonacoffee #dalgona #dalgonacoffeechallenge #korea #korean #quarantine #quarantinelife #lifeinkorea #️ #coffeelover #hairstyles #haircolor A post shared by Sophie Kim 하은 (@sophie.h.k) on Apr 2, 2020 at 7:26am PDT

Social media usually picks up on a little piece of culture from anywhere around the world and as long as certain people believe them to be attractive, these pieces of culture are then spread like wildfire! Asia has a few bits and pieces of their culture that have been shared not just through migration but by social media in general.

From ramen to bubble tea or sushi to fried rice, there have been quite a few pieces of culture that have grown in popularity massively because of social media. Asia is known to have quite a lot of treats and now that there is a strict travel ban, the best way to enjoy those treats is by trying to make your own! The question is no longer how to make dalgona coffee, the question is "when?"