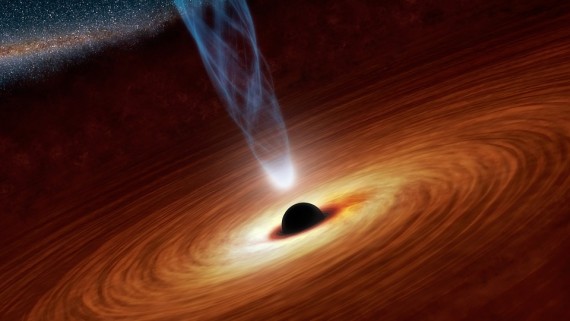 Astronomers have recently discovered a mid-sized black hole they think could provide the missing information on how these cosmic entities are formed.

Data from NASA's Hubble Space Telescope as well as two X-ray observatories were used by researchers to locate the black hole. They discovered the cosmic entity in the process of destroying a nearby star.

Black holes are a culmination of a gravitational force so powerful that nothing can escape its clutches.

What it actually is

Coming in at more than 50,000 times our sun's mass, the newly discovered back hole is located approximately 740 million light-years away in a separate galaxy that contains much fewer galaxies than our own.

Classified as an 'intermediate-mass' black hole, it is one of the few that have been identified. Sitting between the sizes of a supermassive black hole that are found within a galaxy's core, and the stellar-mass black holes which are produced due to the collapse of massive, individual stars.

An astrophysicist from the University of Toulouse in France, Natalie Webb, has aided in leading a study of the recent finding which was reported in Astrophysical Journal Letters publication.

They were able to confirm that the original discovery of the team back in 2010 turned out to be the intermediate-mass black hole, Webb told Reuters. The star it was feeding on was approximately a third of the mass of our sun.

The astrophysicist also noted that scientists have been looking for these sizes of black holes for nearly 40 years, with only a handful of fewer than ten good ones being known.

She expressed her delight due to the significance of even locating one such black hole. Along with the event of it consuming a star that only happens every 10,000 years or so, the two circumstances are considered very rare happenings.

Is there a black hole near us?

Webb dubbed the discovery as the "missing link" among the black holes as it provides additional insight to our understanding of the range of these cosmic bodies. Experts have plenty of data regarding stellar-mass black holes, ranging from sizes of three to 100 times our sun's mass, but not enough information regarding the middle intermediate-mass sized ones.

These black holes remain challenging to locate, and scientists are unsure of the reason for this case.

One idea is offered by Dacheng Lin, an astronomer from the University of New Hampshire and lead researcher of the breakthrough. She states the best possible explanation for this is the elusive intermediates reside in a locale devoid of gas. This phenomenon leads to a situation where the black holes have nothing to consume and very little radiation if any, to emit, resulting in only very few of them to exist out in space.

[Video] Watch the' Actual' Video of a Soyuz Capsule Dock with the ISS: Was it Edited?

A video has been uploaded to Twitter showing the "actual" video of a Soyuz capsule docking on the ISS. Was this edited?

New Discovery: Mars Might Not be the Only Planet Aside from Earth that's Habitable, How About Jupiter's Moon?

Scientists have recently discovered that Mars might not be the only planet that is habitable. What about Jupiter's moon?