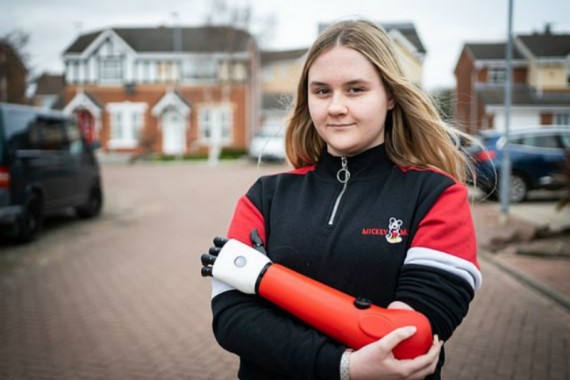 A British fourteen-year-old girl spent her whole life with only one hand. With modern technology, however, she is now starting to learn how to ride a bike ever since being equipped with the first-ever medically certified, 3D-printed bionic arm.

Aimee Ashton, an art student, hailing from Hull, was born without most of her left arm. She had previously been given prosthetic limbs but soon stopped because she said they 'didn't do anything' and were unable to respond to her movement appropriately.

Then, a Bristol-based company called Open Bionics have since custom-fitted her with the 'Hero Arm' costing around £10,000.

A marvel of prosthetic engineering

The arm is powered by batteries and receives signals from the muscles, which allow the wearer to operate and accomplish tasks using both hands.

The arm is also comfortable to remove and consists of what is known as a 'breathable socket' that lets air in. It can also hold and stay in place with its 'freeze mode', which is useful when you need to keep something in place.

The creation is customizable for each user and can be coloured; however, they like.

Given the arm, aspiring teacher Aimee could soon do activities that she couldn't do before such as bake, ride a bike, and even learn to drive once she turns 17.

The teen stated that experiencing the movement of the bionic arm was akin to having a superpower, something she's never felt to a standard prosthetic.

The reason for defect regarding the teen's arm is currently unknown, although experts speculate she was exposed to amniotic band syndrome while inside her mother's womb.

Throughout her life, Aimee has had prosthetic limbs produced for her by the National Health Service (NHS). Still, of all these times, the arms were never responsive enough for her to engage daily activities with satisfactorily.

Hope for a new life

The hopeful teenager is now beginning to learn how to ride a bike ten year after only being able to watch her friends cycle to school.

Aimee's mom was ecstatic to see her daughter finally getting what she's always wanted, something that would make her feel normal around other people.

The mother, Samantha Thirkettle, discovered her daughter's condition during their 20-week pregnancy scan. She said it was a lot to take in and spent the next 48 hours and just hoped for the best for her and her daughter.

She ponders about the time Aimee obsessed with taking part in her school's skipping race during sport's day even though should properly hold the rope due to her condition.

As she grew older, Samantha would notice her daughter attracting people's gazes and knew that her daughter was hiding her response. She would cross her arms over or put it up her sleeve.

At a relatively young age, Aimee knew she was different, and her knowledge of this kept growing as she did.

Her mother believes that she would have been left-handed just like her if her daughter was born with complete limbs.

Having only one arm to work with has always made it difficult for Aimee to pursue her dreams of becoming an art teacher when she graduates.

But now, with her new companion to lean on, she can finally accomplish what she's always dreamed of doing and progress towards her childhood dream.

A group of scientists from the Baylor College of Medicine located in Houston has recently developed a certain brain implant that actually allows both blind and sighted participants to "see" the shape of different letters!

Scientists were able to find out something particularly different from the 21/Borisov. The comet from another planetary system could be revealing more about the galaxy.