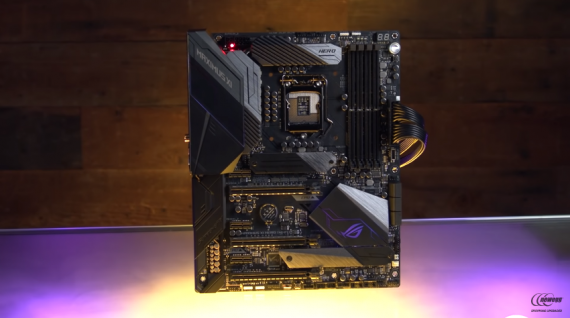 ASUS ROG has clearly been making a name for themselves in the gaming world and now by sponsoring gamers and also by offering the best gaming parts your personal computer needs. A little earlier, leaks have slowly confirmed the existence of a certain XII-generation of the new ROG Maximum motherboards.

Now, VideoCardz itself has published what it has claimed is this series' very own full product data-sheet! This data sheet has been leaked with courtesy from WhyCry and has revealed just how massive ROG can get with its specs and how it functions.

What does the leak say?

The leak has been able to reveal some pretty juicy insights on the upcoming ASUS ROG Maximus XII Motherboard series! The leak has revealed that this specific line-up consists of 5 different options: the XII Hero (Wi-Fi); Formula; Apex; Extreme and Extreme Glacial!

These are a few names you might want to remember if ever further leaks come up later on revealing additional specs. At least you'd get a head start and would be able to compare what is real, what's not, and what is to be expected.

These leaks are actually backed up by a few images of spec sheets, with the exception of the latter, which is actually thought to be a SKU of the previous XII Extreme but in different color (either white or maybe even icy blue) in any of the cases.

All of these boards are said to be able to support the PCI Express 3.0 instead of the 4.0, they are actually now thought to be destined for the Comet Lake-S processors. All of the 4 boards previously described are known to also support the latest in Wi-Fi and Bluetooth standards, although they do diverge in terms of their wired cards.

Read Also: The ASUS' Prime Z490 Motherboards Leaked for Intel's Comet Lake-S! Is AMD in Trouble or Will They Still Remain Number One?

The XII Formula as well as the Extreme are all set up to support a 10-gigabit (GB) Ethernet, whereas the best that the new Hero as well as Apex can do is reach up to 5 and 2.5GB respectively. This is quite a huge difference especially if you think of the 10GB and the 2.5GB differentials.

Then again, the latter is actually only one of the new series apparently able to support up to 2xDDR4-500 memory, while the others only have 4 slots for an overclocked DDR4-4800 memory. Each one of them have a power stage design that equals all the way up to 16, as well as multi-card SLI/CFX interfaces.

Unfortunately, this specific apparently official product info still does not stretch all the way to a launch date for this new hardware. The new hardware is quite competitive and can be overclocked to its full extent giving the gamer a really good experience.

Although the specs are still a little complicated and the final breakdown has not yet been given, the new ASUS ROG Maximus XII Motherboard is definitely expected to be a beast when it comes to power.

In order to stay at the top of the freelance market, you'll have to have the best equipment with you to improve your output.

This Computer Keyboard For Keyboard is Only 60% of the Regular Size: Would You Buy ot for $110i?

Both Kingston Hyper X and Ducky have collaborated together to bring computer keyboards to the next level with a $110 Ducky One 2 Mini that is only 60% the size of a normal keyboard.

If you're a digital nomad and plan to get yourself a slim laptop, here are a few pointers on how to pick between an ASUS, Acer, and an MSI.

Boost Your Gaming Signal with These Wi-Fi Adaptors: ASUS, TP, or Netgear

If you want to boost your connection without using a LAN or Ethernet, you might want to get yourself a Wi-Fi adaptor. Here are a few adaptors that could really improve your connection.