Balmuda's Steam-Based and Radiation-Free Toaster is Here! Would You Buy It at $329? 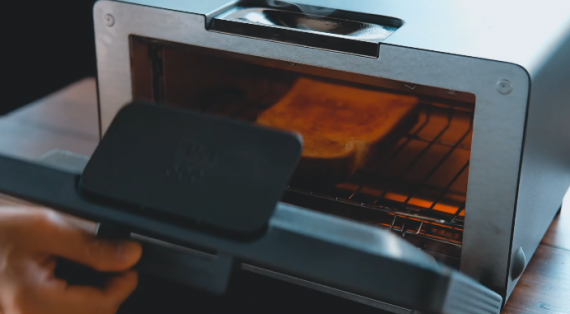 Let's face it, sometimes most people just don't have enough time to cook things in a healthy way which is why they need instant results. Sometimes, these instant results can be harmful just like in the case of toasting bread.

Did you know that most toasters use radiation to toast your bread? Yes! Radiation! This may come out as a shocking revelation if you did not know this before but this practice is very common especially with microwaves and microwave ovens that do not use actual fire to cook.

One advantage of these electric toasters is that they are really quick and you can get instant results with a simple push. But what if there was an alternative to these dangerous radiation-using toasters? Finally, there is!

A Japanese brand called Balmuda has just recently released its popular The Toaster in the United States, which uses its a one-of-a-kind steam technology that is available on both sides of the Pacific without requiring any kind of extra effort!

The sad part of this amazing product is that it costs quite a lot. The steam-based toaster sells at $329 on the company's own website (and also soon on Amazon and Williams Sonoma), but there's a specific reason for this steep price.

How this toaster works

Instead of using the regular wires, The Toaster makes use of precisely controlled steam on both sides in order to heat your bread with even more consistency while still preserving the flavor and moisture.

Wired even noted in its previous 2016 review that this specific Balmuda's device could not make the regular toaster sublime, but it really did preserve the innate flavor of higher-quality options and it could even bring stale bread back to life!

This difference could be spotted if you are the type of person who prefers to buy their bread at the local bakeshop instead of at the supermarket. You will also be able to use this toaster beyond just plain bread but also pizza, cookies, and even a few frozen foods.

Read Also: Would You Live in a Mobile Star Wars Sandcrawler Micro Home? What if It Costs $64,000?

The movement towards safer alternatives

Although it may be tempting to get that fast fix oven that uses radiation, it is also very harmful once you use it on a constant basis. Did you know that if you microwave water and feed it to your plants, they will wilt? This is how much radiation is used in other products and it could be very harmful to your health.

If this happens to plants, what more the human body? Although the human body may be stronger than plants, it is still very necessary to keep ourselves healthy by maybe giving up some harmful habits and choosing a safer approach.

Although $329 may seem like a steep price for a simple toaster, also factor in the health advantage that this toaster brings and not just the price itself.

Read Also: Best Pink Smartwatches For Women: How To Pick The Right One For Her

Although scientists say that the levels found in US shores is not a cause of alarm, it is notable that the radiation leak has reached 5,000 miles from the source.

Prostate Cancer: What You Need To Know About The Male Species' Most Common Nemesis

After skin cancer, Prostate cancer is the most common cancer among men. Currently, there are only two methods of curing it - surgery and radiation therapy.

A new type of fabric that has Nona poric properties can give a cooling effect to the user by allowing convected heat to escape from the body, thus, lowering temperature levels that delivers cooling comfort.

New research found that the journey to Mars will have perilous consequences to astronauts. Being exposed to harmful cosmic rays will cause serious long-term brain damage that will result in dementia and cognitive impairment.

Deflector shield to protect astronauts on the way to Mars?

Deflector shields, like those from Star Trek, may soon be real, and part of crewed missions to Mars. A working model has already been created.

Mars trip radiation too much for humans?

A trip to Mars may be too hot to handle for humans who can't take the radiation, according to new data from the Curiosity rover. Could nuclear rockets come to the rescue?