Drone creator Verge Aero designed a light spectacle that showed a group of drones flying into the night sky and forming symbols and words indicating the praise that frontliners against the deadly coronavirus deserve.

The event consisted of around 150 illuminated UAVs positioning themselves above the Franklin Field Stadium and accurately depicting several different medical symbols and the words 'Thank U Heroes' while also sounding the Liberty Bell tone.

The one behind the collective

Verge Aero currently works at Pennovation Works Labs at the University of Pennsylvania. He created the eight-minute-long display as a gratitude to the work and bravery of all those fighting in the frontlines helping and saving people from the coronavirus.

The spectacle was performed on Tuesday evening in the middle of Philadelphia, where the audiences were reminded of the safety protocols they were suggested to follow, such as wearing facial masks and maintaining social distancing.

Nils Thorjussen, CEO of Verge Aero, said the display was designed to be viewed from anywhere inside the Pennsylvania Hospital where viewers can still practice social distancing.

The CEO also said it was their way of giving back to the medical workers battling tirelessly day and night for the past few months. The performance was a way for the company to use its resources to show just how much the American people respect and thank the brave heroes working for our sake.

The show is part of two campaigns making headlines on Twitter; #PhillyShinesBlue and #LightItBlue. It featured an array of different messages and symbols showcasing the love and support that Americans cannot convey physically due to the safety protocols in place, to the health and medical workers in the frontlines. 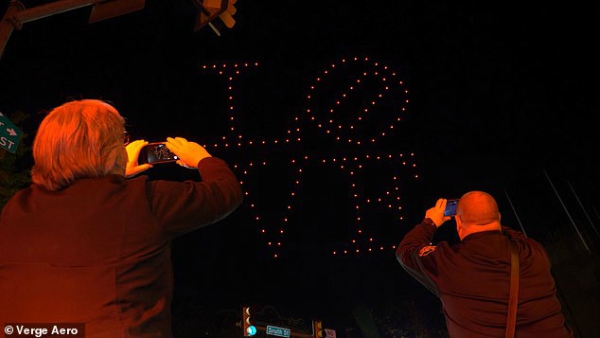 The drone company is at the forefront of the drone light shows industry and has experience performing in major events such as the Olympics and concerts of famous artists.

The US has been one of the worst-hit countries by the COVID-19 pandemic, which started from Wuhan, China. It has already recorded more than one million positive cases, along with more than 61,000 deaths.

The frontline medical workers are putting themselves at risk to help reduce the threat and maintain the safety of other people, even at the risk of their well-being. Hospitals are flooded with patients, and the American people want to let them know just how appreciated they and their efforts are.

Campaigns for the brave heroes

Early this month, the campaigns resulted in light shows turning the night sky blue as a tribute to all medical professionals around the world.

Among those that were lit up included the Empire State Building and Times Square and several other iconic locations to indicate the level of appreciation the American people have for their heroes.

Andrew Cuomo, a New York governor, said that at these moments where we desperately fight against a vicious enemy, there has been but one common thing throughout the endeavor, and that is the medical professionals working for everyone else's sake.

The governor stated they are what we should strive to be heroes that work not for themselves but others.

A massive burial was started to be dug up at Hart Island by the city as a memorial to all those who were lost in the fight.

The events and entertainment industry was leading the #LightItBlue campaign and was initially launched in the UK to give praise to the health workers risking their health to save others.