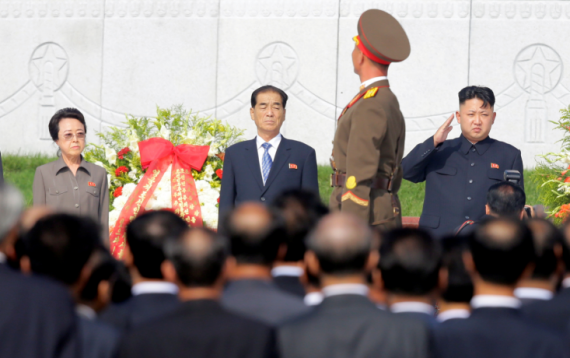 FILE PHOTO: North Korean leader Kim Jong Un (R) salutes as an honour guard march past as he and his aunt Kim Kyong Hui (L), Premier Pak Pong Ju attend the opening ceremony of the Cemetery of Fallen Fighters of the Korean People's Army (KPA) in Pyongyang, North Korea July 25, 2013, as part of celebrations ahead of the 60th anniversary of the signing of a truce in the 1950-1953 Korean War. (Photo : REUTERS/Jason Lee/File Photo)

North Korea's very own leader Kim Jong Un was recently spotted making his first appearance after two weeks of being on the down-low by attending a certain completion ceremony of a particular fertilizer plant. The plat was located in Suncheon, a central southeastern town of North Korea.

The whole appearance was reported by the South Korean news agency Yonhap along with the North Korean state0run news agency known as KCNA.

North Korea and their nuclear plans

According to a researcher of East Asian nuclear proliferation named Margaret Croy in her statement with Newsweek, there is a recent study that suggests that these new fertilizer factories could be extracting uranium from certain phosphoric acids.

The dictator has put a lot of effort into accelerating North Korea's own nuclear efforts and at the same time emphasizing other economic infrastructure developments ever since becoming the dictator in 2011.

After two weeks of silence, Friday was his first appearance putting all the public speculation and rumors following his illness and death to rest. The rumors started to spread last April 20 by anonymous sources that were featured in the Daily NK, a South Korea-based media outlet.

The circulating rumors stated that he was in ill health after going through a recent heart surgery that took place on April 12.

There were two United States officials that told Newsweek last April 21 that they had no reason to even consider Kim as either suffering or even dead. This happened around the same time that Yonhap reported to a certain South Korean government official who also clarified and said that there were no reports that pointed to Kim being ill.

The speculations about the dictator's health started when he missed the Day of the Sun celebration that was a tradition held to honor his exalted grandfather. Kim Jong Un also missed another national holiday which honored the establishment of the anti-Japanese guerrilla units by the national founder.

Sometime April 26, there were a series of photos that showed the personal train of the dictator that was stationed near the country's very own eastern coast city of Wonsan, where he reportedly owns a villa.

Back on April 28, two experts on North Korean affairs along with other sources previously stated that the supreme leader could just be laying low to avoid the coronavirus.

Now that Kim Jong Un has finally shown his face in public, all those rumors about his illness or death can finally be put to rest. The rumors have gone as far as predicting his sister Kim Yo Jong as the next dictator of North Korea.

These speculations have spread fast and despite their circulation, the supreme leader has remained silent until today. North Korea has shown much conviction towards their nuclear projects and the appearance of the supreme leader on a fertilizer plant that could potentially power up the country's nuclear resources is quite symbolic.

Read Also: Who is Kim Jong Un's Sister, Kim Yo Jong? A Ballerina Who Studied in Switzerland: More About the Mysterious Dictator's Sister

There is a viral video circulating Facebook that suggests the funeral of a North Korean leader except, this is not the video of Kim Jong Un. Recent reports suggest he may be hiding from the coronavirus.

North Korea has just created its own smartphone which, unfortunately, looks like a mix of all the good qualities of other smartphones including the iPhone 6S and the Samsung Galaxy S7 Edge.

Bill Gates and other influential world personalities gather to speak about the imminent catastrophe that will be brough on by a bioterrorism attack. He stresses that genetically-engineered microbes can kill thousands, and there's a current lack of preventive measures in place.

The Doomsday clock moves forward, placing us now 30 minutes closer to apocalypse . The Bulletin of the Atomic Scientists (BPA) moved the minute hand of the symbolic Doomsday Clock from three minutes to two-and-a-half minutes to midnight, a move that has not been done in 70 years.

How To Deal With Killer Asteroids? Nuke Them, NASA Suggests

Astronomers say that the Earth is not prepared for a massive asteroid attack, and if a last minute asteroid-deflection is needed, we'll just have to nuke them.