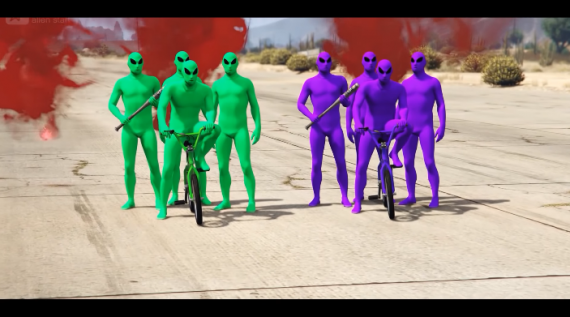 A recent gang war broke up in Grand Theft Auto (GTA) Online and it's a gang war that you would never expect to happen. Instead of the regular two factional gangs fighting over territory, it seems that the battle has gotten "out of this world."

Grand Theft Auto Online allows the players liberty of installing a certain level of mods to customize their characters and create peculiar sights, events, skins, weapons, and even gameplay.

The gang war that is going on right now is between the green aliens and the purple aliens and they are finding a way to overpower each other with guns and numbers!

So far, there is still no victor to this ongoing gang war but it is quite a peculiar sight to see in Grand Theft Auto Online. The gang war only started earlier this month but it seems like the sides have been able to grow in numbers.

The gang war is beyond just the green aliens fighting the purple aliens but the gang actually terrorizes poor players that have no idea what is going on. The gang beats up players who clearly have no part in the ongoing gang war.

The publicity surrounding the gang war

The gang war is being documented on Reddit and other social media outlets and a post on Reddit that held voting within the community came up with certain interesting results. According to the votes, the green aliens reached 50, the purple aliens reached 20, while humanity is still at 107.

Another post suggested that the GTA Online gang war is actually getting out of control and needs to stop so regular players can enjoy the game in peace and getting caught up in the crossfires. Instead of peaceful gameplay, some players die as part of being collateral damage to an ongoing gang war.

How to join the alien gang war

According to a certain post once again on Reddit, "how can I join the alien gang wars?" shows that there are actually people still very interested in joining the gang war. According to the comment section, joining the chaos is not actually that hard.

A comment that has been upvoted states that to join these gang wars, all you actually need to do is get yourself a green alien suit or a purple alien suit depending on what faction you actually want to join.

The discussion on the comment section is brief but two people have commented that perhaps the first way to join the gang war first is to pick a side, buy an alien suit with the color of the side you choose, then approach members for further guidelines.

Grand Theft Auto Online is no stranger to gang wars but this particular green alien versus purple alien gang war is quite interesting.

How to Make Money in GTA V in Just 2 Hours

If you want to learn how to make money in GTA V in just two hours, check out the ultimate Rockstar Games hack.

Rumors Say GTA V is Free via PC and Epic Games: Here's How to Download it

Rumors have started spreading saying that Rockstar Games' GTA V will now be free for PC and Epic Games. Here's how to download it.

Grand Theft Auto Online has just recently gotten an alien survival series as well as a peyote vegetation addition from Rockstar Games to spice things up a little bit.

GTA 5 Online DLC: Why New 'Vigilante' Supercar is a Must Buy

Here is why you should buy the upcoming DLC supercar ‘Vigilante’ in GTA Online.