A Public Beta testing of the iOS 13.5 has just released, according to Anthony Karcz from Forbes. However, it's not actually called iOS 13.5 Public Beta 3. It's called the iOS 13.4.5 Public Beta 4. Karcz asked why the numbering was all jumbled up in the article. According to Apple Insider, Apple had to change its label because of the contact tracing feature for people with COVID-19.

Meanwhile, a private group on Facebook has been concerned with the fact that Apple is trying to push an update to allow these phones to do COVID-19 tracing. A post on the group expresses its alarm to the fact that a new Exposure Notification API will be added to the device.

A screenshot of the official details were uploaded to the group in a screenshot. 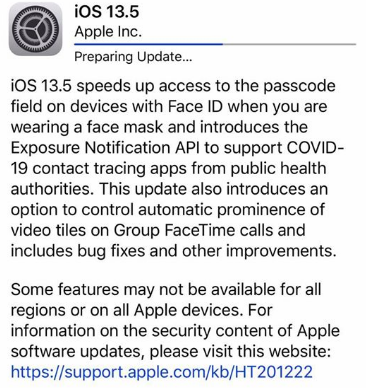 According to The Verge, Apple iOS software originally had a different name back then: OS X. The OS X was used in MAC devices back then. Eventually, the first iOS software came to be in 2007. The iOS 1 welcomed the iPhone 3G. Fast forward to 2008, the iOS 2 was born. The iOS 2 bore a distinct feature in Apple mobile devices: the App Store.

In 2009, Apple released the iOS 3. This specific mobile software didn't have any notable features. However, Apple upgraded the functionalities within the Apple mobile software. Next, the iOS 3.2 for the iPad was released. The interface of the screen changed because of the bigger screen capacity of the iPad.

Then, the iOS 4 was released. This specific iOS software specializes in the easy multitasking feature that Apple provides in its mobile devices. After that, the iOS5 introduced Siri, a voice-control feature of Apple that offers virtual assistance. From this point until the recent iOS 13.5, Apple has developed its mobile software to cater to the accessibility of people better when using their phones.

As stated by Karcz in the article, contact tracing is a feature in phones wherein officials (government, medical, etc.) can contact someone. In these more recent times, Apple has enabled a contact tracing API that allows people of authority to make contact with people who are contracting the coronavirus.

The data that is shared is not picked personally and in anonymity. Once a person is considered positive of COVID-19 and has agreed to input his data into the contact tracing API, people that have been in contact with him/her will be notified that there is a possibility that they have been exposed to a person with COVID-19.

This is to ensure that people use their masks at all times during this health crisis.

Read Also: How to Make Money Ordering Your Own Food from DoorDash: Man Bought $24 Pizza From Itself for $16