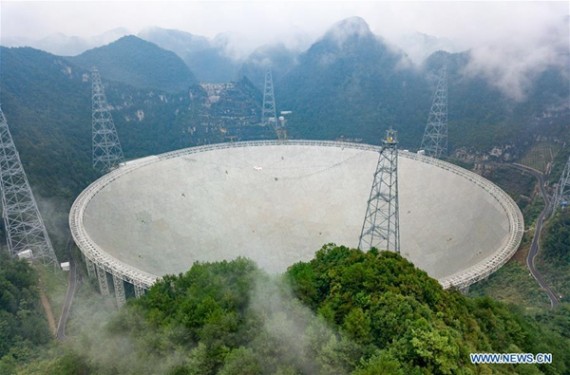 Soon, the search for life outside our own solar system will receive a significant helping hand thanks to China. The country's new Five-hundred-meter Aperture Sherical Telescope, known as FAST, is going to commence their search for alien life when September comes.

What Is Going On With China's New Telescope?

At the beginning of this year, China officially started the telescope's service for general scientific purposes. However, the telescope is going through upgrades that will reduce the interference it gets as well as helping it search for alien life better.

The chief scientist Zhang Tongjie stated that the search won't be interrupting regular science missions. As of right now, we shouldn't be raising our hopes for finding aliens in the near future.

There are narrowband candidate ET signals that are interesting to see, but they are most likely not originating from intelligent life. A typical distinct radio signal will usually come from a pulsar or a random fast radio burst.

But if an alien lifeform does broadcast radio signals and we're close enough to be able to receive their signals. Then the FAST will receive the signals with a higher chance.

What's The Details Behind The Telescope?

The basic information about the telescope has already been given above. But there's more to know about this giant radio telescope from China.

The scientists gave the FAST a nickname. Its nickname is Tianyan, which translates to Eye of Heaven or Eye of the Sky.

You can find the telescope in Guizhou, Southwest China.

The main purpose of the telescope is to study pulsars. Three years ago, FAST already found two new pulsars, which is astonishing for a telescope that was still being improved.

But if you want to talk about any regular pulsar, then the telescope has found more than that and it will keep finding more.

The FAST finished construction in 2016, which was twenty years after the FAST was initially proposed. The cost of building the telescope was more than 170 million U.S. dollars.

If you visit the Chinese Academy of Sciences, its where you'll find the Chinese National Astronomical Observatory, who are the FAST's operators.

The largest radio telescope used to be the Arecibo Observatory in Puerto Rico, but the FAST is now the largest one you can find. Both of these large telescopes use a large parabolic dish, and they can only use a small fragment of their areas each time.

But China's FAST isn't only bigger than the previous largest telescope, it has a different process to operate it and it offers more flexibility.

The FAST can change the shape of its surface, but the Arecibo's shape can't change. If you know what a segmented mirror telescope is, the FAST is like one.

Explore Space From Home: Best Home Telescopes For Stargazing In 2020

Want to look closer at the stars? Then you'll need one of these home telescopes for your stargazing needs that you can get on Amazon right now.

Elon Musk's Tesla is now accepting design submissions for its upcoming Chinese-made small electric cars. Tesla has made this announcement official via the company's WeChat account over in China and has invited all car designers to pass their own designs for the brand new vehicle

The scientists that took a photograph of 1998 OR2. are currently executing social distancing guidelines as well as wearing face masks at all times while in the facility, which brought about the hilarious surprise. Zoom out to see it yourself!