The Epic Games Store will finally end its Mega Sale tomorrow, but not without giving away Ark: Survival Evolved and the Samurai Shodown NeoGeo Collection for free. They will be free to keep, which means claiming it now will make it a permanent addition to your library.

Since two years ago, the Epic Games Store has been releasing free games often like a friendly grandmother down the street. The games have varied in popularity, but a free game is still a free game. So, it's worth claiming games even if you're not sure about them!

The Samurai Shodown NeoGeo Collection was known to launch on the Epic Games Store and be free to keep for the week due to their official page saying so. Ark: Survival Evolved was rumored to be the free game last week due to a leak, but it was pushed back and the first Overcooked took its place. But now Ark: Survival Evolved is one of the free to keep games this week.

As a beginner, taming dinosaurs in Ark: Survival Evolved might seem intimidating. However, there are a few dinosaurs that beginners can tame without any issues. Here are the dinosaurs that a beginner can tame.

The dilophosaurs are surprisingly easy to tame when you get a slingshot. They aren't much of a threat when they're alone, but they're a force to be reckoned with once they're in a pack.

These dinosaurs are easily replacable, so if you lose a few, you can tame more than a few quickly. If you're ever in a bind and need to get out of there, you can let the dilophosaurs take the attention off you while you escape.

At the beginning, you won't be able to carry much stuff. However, that's where the parasaur comes in. Parasaurs can act as your pack mule and carry the stuff you don't need with you.

If you don't know where danger is lurking, the parasaurs can scan for and detect dangerous dinosaurs. This ability is helpful for players that don't have much good gear yet.

Read Also: Watch as Scientists Simulate The Killer Asteroid That Caused The Extinction Of The Dinosaurs in 3D

The raptors are a challenge to tame until you gain access to bolas. But when you do, you can add raptors to your army of dilophosaurs.

Your damage output will become higher thanks to the raptors being added to your dinosaur army. A dinosaur army of dilophosaurs and raptors will allow you to defeat tougher enemies.

Once you think you're capable of it, tame a triceratops. The triceratops are difficult to tame since you can't use bolas on them.

If you do tame a triceratops, it will completely improve your chances of surviving when you're at a low level. The triceratops is an excellent tank, and the knockback they deal will let them fight enemies that are bigger than them if the attacks are correctly timed. 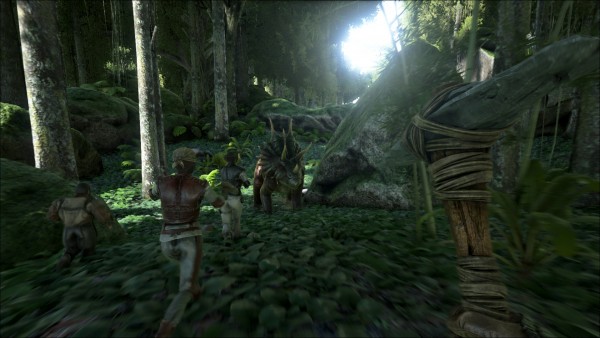 How To Tame Dinosaurs In Ark Quickly

A helpful tool when taming dinosaur is this taming calculator. Explore the site a bit and you'll get the hang of it.

The least challenging way to tame something to knock it out first, then check the taming calculator for the creature you knocked out.

You'll see that there is a list of food that you can feed the unconscious creature. The list will show you how much of that food you will need to feed the dinosaur before you tame it.

Ensure the creature's torpor doesn't go too low, because when torpor runs out, it regains consciousness. The taming calculator site will also have a torpor timer on each creature's page.