Rockstar Games recently announced that Grand Theft Auto 5 would be ported over to the PlayStation 5. Many fans all over the world are excited to see when they will be announcing Grand Theft Auto 6 to the public. Fortunately, an employee may have accidentally leaked that GTA 6 is being developed.

There have been rumors circulating that GTA 6 for a while already, and employees from Rockstar claimed that the game was in early development this past April. However, a possible confirmation has surfaced.

A keen-eyed Twitter user by the name of NickPlaysGamesX has found out that a Rockstar employee has a hint on their LinkedIn profile. 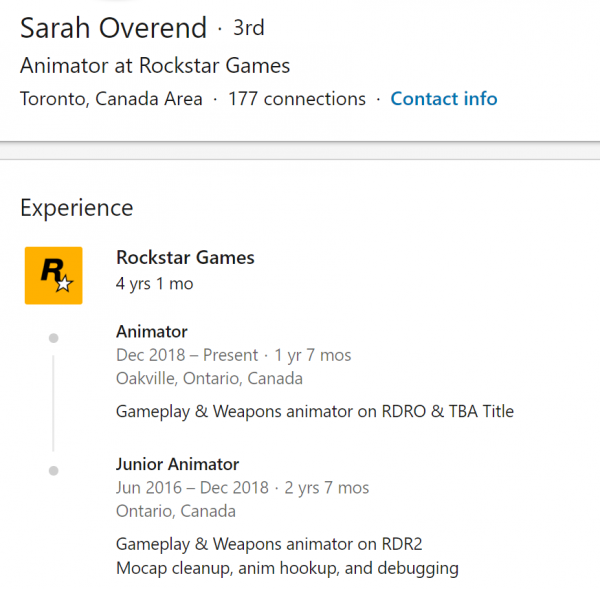 The employee is named Sarah Overend. Their previous work with Rockstar Games was on Red Dead Redemption 2, where they worked as an animator of the gameplay and weapons from June 2016 to December 2018.

The most recent work of Overend stands out among the rest. She is currently listed as working on weapons and gameplay animation for Red Dead Online along with a yet to be announced game.

Her LinkedIn profile states that she began working on both of the titles since December 2018 since there's a range of possible titles from Bully 2 to LA Noire 2. GTA 6 isn't the only possibility of the TBA title. We can be hopeful, though.

It's A Possibility That It Is Grand Theft Auto 6

This information ties in with a theory where the takedown of the Liberty City mod for GTA 5 in 2017 means that Liberty City is going to be added in as a future update to GTA Online's standalone free-to-play version.

If you consider how much time and effort that Rockstar is putting into GTA Online, a Liberty City expansion for the game might be in development and that Sarah Overend is working on them as a gameplay and weapons animator.

It could either be the Liberty City expansion or update, or the next installment in the Grand Theft Auto series is coming along better than once thought.

This TBA title mentioned in the employee's LinkedIn page is only adding to people's speculations and everyone has to wait for developments to occur in the future if we want to find out the definite answer.

Many people were disappointed with the reveal of GTA 5 for the PlayStation 5 during Sony's PS5 reveal event. They thought that it would be a reveal for Grand Theft Auto 6, but it wasn't. It was a disappointment for many fans.

It's so sad that there won't be a GTA 6 - This is... what? The third console generation that GTA5's been ported to?