A Samsung update previously released this year for the new Samsung Galaxy Note 9 that has unfortunately made the device's display green. A similar issue also appeared in the previous Samsung Galaxy S20 Ultra starting at about the same time, back in April 2020. 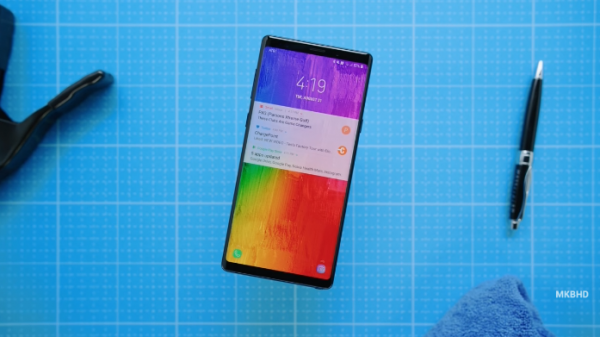 (Photo : Screenshot From Marques Brownlee Official YouTube Channel)
Ever Experienced the Green Screen on Your Samsung Galaxy Note 9? You are Not the Only One!

Samsung then suggested that they were hard at work on the whole issue for the previous Galaxy S20 Ultra, but the issue has still persisted.

The common problem with the ongoing devices of Samsung

The new Galaxy Note 9's very own "Display Discoloration & Overheating" problem had new users checking in and commonly reporting similar results as soon as only 2 hours before the article was set to be published.

There have also been several reports from users heading into the Samsung service center where there were a lot of full display replacements recommended to the customers, while the other reported that they received no reply from Samsung regarding the issue whatsoever.

While most of the issue seems to be creeping in from April 2020, some of the users reported the display changes for their own Galaxy Note 9 after the previous March 2020 update. Via the known Samsung Galaxy Note community forum that you'll find a link to in the known Telegram Group where users of the Note 9 discuss their hard efforts to make Samsung respond.

The other threads were also posted as of about two weeks ago and even on July 2. The latest round also seemed to be gathered sometime around the previous June 2020 OS update from Samsung.

Samsung has given a general answer saying they are already focusing on how to fix the problem. There were no specifics on how Samsung plans to do this, but so far, some of the complaints have been heard.

Read Also: How to Start Your Photography Career: Check Out these Best Smartphones 2020

Samsung Galaxy Fold 2 and other leaks

Thanks to the known Galaxy Fold 2 leaks, there is also a pretty good reason behind when Samsung's foldable follow-up to the controversial original Galaxy Fold is coming, and how much it will cost. There is also a new leak that claims that the phone will definitely debut under a whole new name.

The revised name of the new leak comes courtesy of a certain report by Sammobile, citing a reliable source. The change in name would also bring all of the previous Samsung's foldable phones made under the known Galaxy Z brand, which was introduced earlier this year when Samsung unveiled the Galaxy Z Flip.

The juiciest leaks around the whole Galaxy Fold follow-up claim that the phone will debut alongside the known Galaxy Note 20 back in early August but somehow that Samsung won't really ship the phone out until September. When this happens, the new Galaxy Z Fold 2 is also expected to cost quite about the same as the previous $1980 original.