Cheating is not new in gaming, especially in online matches. But if you're caught using them while live streaming the game to your audience is an entirely different story. 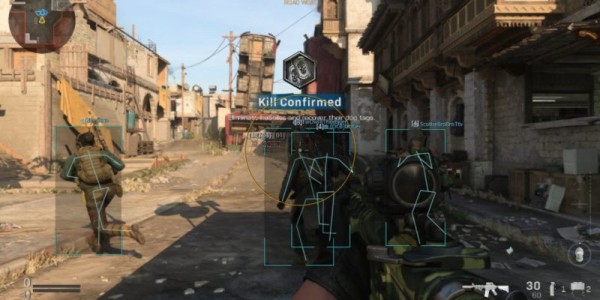 This is what happened to TwistedBear when he forgot to hide his cheats while broadcasting and seemed completely unaware that his wall hack cheating software was visible during an online match.

The concept of this wall hack is very simple. It shows a clear stick outline of who is your ally and who is your opponent allowing the player to ambush the other anytime as noted by The Gamer. You can see the video below.

After the clip went viral, TwistedBear's channel was no longer available and Twitch has presumably caught wind of the violation after several hours. No announcement has been made by the streamer that acknowledges his use of wall hacks.

The aforementioned incident was not the only instance where cheating methods have been spotted. Through the use of auto-aim features, they're able to pull off practically (or at least nearly) impossible kills, and, particularly in the instance below, they even know where a player is behind a solid wall.

From being highly suspicion (48 kills) to blatantly not giving a single fuck if everyone knows your cheating. from r/CODWarzone

I don't understand why I'm forced to deal with this on Xbox. from r/CODWarzone

The Move from Activision

Games are meant to be enjoyed by everyone fair and square without the use of cheats not only to show good sportsmanship but also as a way to measure your ability and skills as a gamer.

According to Lad Bible, Infinity Ward enabled two-step SMS authentication for Warzone PC players in what was considered at the time a successful blow against cheaters.

In a recent move from Activision, several Call of Duty: Modern Warfare and Call of Duty Warzone users have been permanently banned from online multiplayer in a report from Digital Trends.

However, some players who have not cheated were confused as to why they were banned from the first place even if they showed no signs of cheating whatsoever. The issue was quickly resolved as Infinity Ward restored those accounts.

In this tweet below, you can se that @Savjz, the husband of Christina Mikkonen was blacklisted by Blizzard because his wife made comments about Blizzard.

Last night, the community lead apologized to Savjz via DM. The lead was told bad information from the CM, which lead to their decision to not continue inviting Savjz to events. This morning they posted this, once again trying to pass blame to Savjz. https://t.co/Bv4qDPFgWf — Christina Mikkonen (@ZerinaX) June 24, 2020

While some banning issues are a case of mistaken identity like this one.