Created by Yasuhiro Wada and developed by Victor Interactive Software, Natsume Co. Ltd, was responsible for the English translation and distribution of the Bokujo Monogatari series in North America, where the games were released under the series title Harvest Moon from 1996 to 2013. 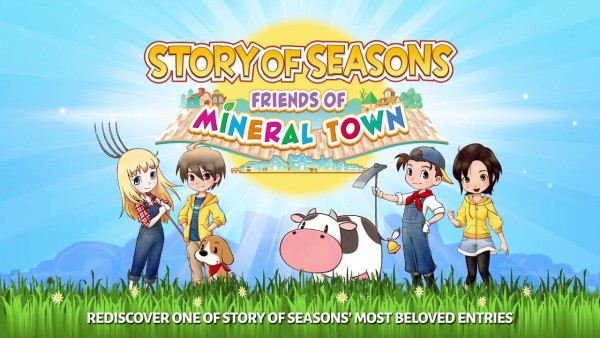 After Marvelous Inc. managed to acquire the Harvest moon franchise in 2014, the video game publisher said that the game will be rebranded by their American publishing brand Xseed Games and rename it to Story of Seasons.

If you're feeling nostalgic and want to give the new game a shot, don't worry as the game is already out in some parts of the world. It will be available on Steam by July 15.

You can check out the launch trailer below.

Getting to Know the Game

For those who are longtime fans of the franchise, this needs no further introduction. But shoul you be interested in knowing what the game is about, here are the details as provided by Steam:

You start your journey in a place called Mineral Town. From there, your objective is to restore your late grandfather's to its former glory. And as a famrer, you are not limited to just planting crops and fruits and vegetables. You are also expected to raise livestock as well in order for you not just to survive, but to also make a living for yourself.

It can't be helped since you live in a town. So, while you're there, be sure to check on your neighbors to see how they're doing and learn more about the town you live in

Honestly, I did not expect that this game allows you to fall in love. But that's one of the advantages of living in a town, I guess. You meet neighbors who are also potential suitors. Play your cards right and you can even get married and start a family.

Go fishing, cook fresh meals, and when your work's all said and done, take a dip in the local hot spring. Experience the farmer's life like never before! Players can also enjoy seasonal events such as animal contests, a fetch competition with your beloved pet, mochi making, and more! Each event requires different skills and will bring you closer to your fellow townsfolk.

This is one game where you can actually marry a deity in this game, regardless of your gender. Just as there are requirements you have to meet before marrying the person of your choice, the same goes for this character as the requirements before even getting to the proposal stage is a lot which is sadly not enough to go through in this article.

If you want to know how you can wed the Harvest Goddess, click the following link.

Summer in Mara Game Guide: How to Make a Fish Dish

Summer in Mara is out! Here's a secret to get past fishing and straight into making a fish dish in no time.

Bummed About Harvest Moon 64 Coming To Wii U? Check Out These Other Similar Games!

A list of similar games for those who wish to play Harvest Moon but can't.

"Harvest Moon 64" will soon be released in the Wii U platform. However, it is reported it would not be playable on the upcoming Nintendo Switch console.

There are no specific combos in the game Dragonball Xenoverse 2 because every character has different special moves. If youre a beginner, this is your guide in doing good combinations in Xenoverse.

This September, a lot of activities of the moon were visible and will continue to amaze everyone with its upcoming tricks.