With Paper Mario: The Origami King being the 6th game in the Paper Mario series, players must once again take up the hammer as Mario together with his new partner Olivia (sorry, Luigi), who is also known as the villain's sister and save the kingodm that has been ravaged by an origami menace! 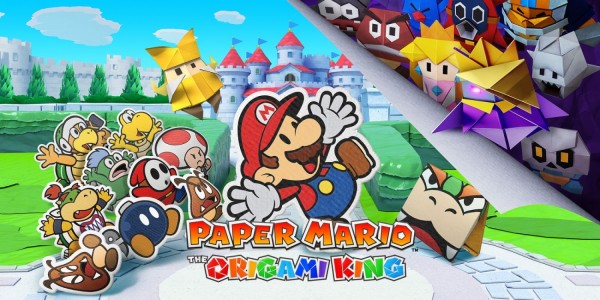 You can even work together with your former nemesis folded-up Bowser) to stop King Olly and his henchmen, the Legion of Stationery, who have Princess Peach's castle tied up or they might end up being Folded henchmen forever.

This game is not your typical run-and-jump game. As this is a role-playing video game, Mario will have to learn some new fighting skills. In the gameplay overview from Nintendo, you will be facing off with the Folded Soldiers in ring-based battles where you strategically line up enemies to maximize damage.

When not in battle, Paper Mario can use an ability called the 1,000-Folds Arms in specific spots to interact with the landscape to pull, peel, hit, and more!

Since this is a paper-based game, you can literally unfold new paths, explore the world around you, unlock the secret of an ancient ruin, brave the raging rapids, step out on stage, visit a string of islands, appear on a quiz show, and even participate in a mid-air battle!

You know those friendly spotted mushrooms? Apparently, they're called Toads that can boost your battle audience and help repopulate Toad Town! But they're disguised. So you have to poke around a bit to find Toads hidden in holes, under rocks, and disguised as origami creatures like bugs and butterflies.

With everything turned to paper, it's not really surprising to find holes in the Mushroom Kingdom. You can use your ability to repair holes as well as your hammer to find hidden items such as secrets and treasures.

And just like a normal RPG, you'll be expected to face bosses as well such as the Molten Feather. It's said that if you manage to defeat one in battle, you'll gain its power.

There's no such thing as a perfect game as there will always be a mix of positive and negative reviews.

Nintendo Life was able to note some of these reviews from GamesRadar, Eurogamer and more. Here are some of the reviews.

Here is one by GamesRadar giving the game a 4.5 out of 5.

Gripes aside though, the latest Paper Mario title is a joy to exist in. An excellent story, charming characters, and the ability to team up with your oldest foes makes The Origami King a triumph. Yes, it may not be the new Thousand-Year Door RPG, but it's something special that should be celebrated.