We know Mark Zuckerberg as the CEO of Facebook and the man who is on his way to colonize the island of Kauai. And now, we're going to remember him in a totally different way--the man who wore too much sunscreen on his face.

In a report from The Daily Mail, Zuckerberg was pictured riding his $12,000 electric surfboard in Hawaii with a thick layer of sunscreen plastered on his face. Wearing a blue hoodie to protect against the rays, the CEO was seen together with pro surfer Kai Lenny and his security team who monitored him from a distance on a boat. Talk about going to extreme lengths just to make sure he doesn't get a sunburn. 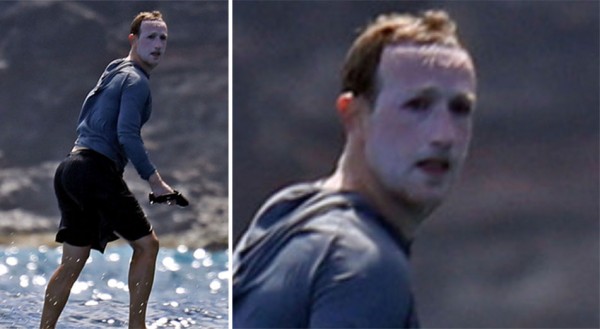 The Change.org campaign was launched three weeks ago after locals on the island of Kauai called on the tech billionaire to stop colonizing the land, claiming he is suing natives in order to build a mansion on their land and has since garnered more than 800,000 signatures.

Together with his wife, Priscilla Chan, Zuckerberg acquired a 700-plus acre property for $200 million in Kauai back in 2014.

Petition organizers have accused "the sixth richest man in the world" of kicking the locals out of their home just for him to build a vacation house. However, representatives for Zuckerberg have responded to the campaign saying the "premise of the petition is false."

If you're looking to petition against Mark Zuckerberg and his move to drive out the people of their ancestral homeland just to build a mansion, you can sign here.

Ever since his picture went viral on the Internet, he has been compared to numerous fictional characters such as Cesar Romero's Joker, the ghost from Spirited Away, Mrs. Doubtfire, and even to a lizard who is shedding its skin, as well as a sleep paralysis demon. Here are some of their reactions on Twitter:

legend has it that every summer, Mark Zuckerberg (aka the Mime Surfer) attempts to catch a wave and until he does, his restless spirit will wander the earth for all eternity pic.twitter.com/7JBpLAzcds — Born Miserable (@bornmiserable) July 19, 2020

No one has ever seen Mark Zuckerberg and the ghost from Spirited Away in the same room, just saying pic.twitter.com/RZ54gjcHJz — Brent Peabody (@brent_peabody) July 19, 2020

Was trying to think of who Mark Zuckerberg surfing reminded me of & then it came to me pic.twitter.com/ybue3Prbkr — Tom Reagan’s Hat (@RufusTSuperfly) July 19, 2020