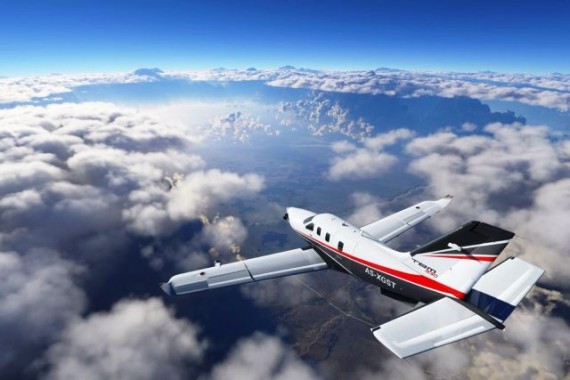 Hurrican Laura devastated the state of Louisiana, tearing apart homes and knocking out power. The storm has left its mark as one of the most powerful storms to hit the United States. Virtual storm chasers did not pass up the opportunity to fly above and through the storm's eye, thanks to Microsoft Flight Simulator.

It has just been a week since the launch of the latest version of Microsoft Flight Simulator, and it had already impressed a lot of its users. Not only does it showcases stunning visuals but real-world weather as well.

So, how did Microsoft make that possible? That required the use of real-time weather data to map out world weather patterns. We have to thank Meteoblue's expertise for that. Meteoblue explained that their technique required dividing the world into 250 million small boxes. They then define the weather with each box. They do this by measuring temperature, wind speed, humidity, rain, and other weather-related data.

For the immersive visuals, the Flight Simulator combines Bing Maps data with procedural generation technology. That is why we see life-like images of trees, mountains, buildings, and landmarks.

Hurricane Laura was very beautiful to look at, Meteoblue co-founder Mathias Müller told The Verge. He said that their models accurately predicted it even days ahead. They are happy that real-time weather is not part of Flight Simulator. Müller added that they would like to put more details and weather parameters to the game. However, the process is too complicated, and thus, could take time.

Said, "I've never seen a hurricane from the inside."

Managed to get some shots of Hurricane Laura over Louisiana as it is happening right now on Flight Simulator.

"Managed to get some shots of Hurricane Laura over Lousiana as it is happening right now on Flight Simulator," said @JMW_BOYZ. "This is insane!" he added.

"Learned a lot about Hurricanes today! Wish me luck!" said Blue Games. He adds, "Flying into Hurricane Laura to gather some data."

It is not just the players trying out the game to experience storm chasing, but even scientists are testing its accuracy. SOFIA astronomer Simon Coudé also got to try Flight Simulator. He told the Washington Post that he wanted to see how it could go. It will be the closest that he could be to a storm chaser, he added. There are still imperfections in the weather system, the Post said after testing the game. The report pointed to the inaccurate wind speeds and clouds not swirling even though the game's satellite view projected an eye is formed.

Read next: Microsoft's Awesome Flight Simulator and Where to Get Flight Sticks (if You're Lucky)

Flight sticks have been, for the longest time, a niche product. If you’re a diehard fan of flight simulators, chances are, you have one.