Undecided on What Vlogging Camera to Get? Let Us Help You! 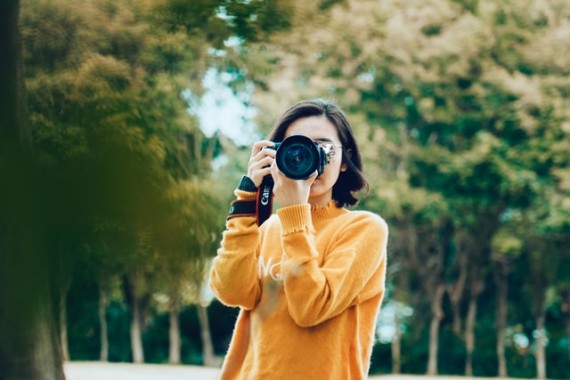 Undecided on What Vlogging Camera to Get? Let Us Help You! (Photo : Marco Xu)

Vlogging cameras have slowly gained a cult following during the last years. And unsurprisingly, they have become sort of indispensable. In a world connected by the internet, content is king. However, however, the gears you use to make those contents can make or break your game. Imagine being a good CoD Warzone player. No matter your skills, having the right gaming mouse and gaming PC can significantly influence how you play the game.

These days, almost anyone can become a vlogger. Now don't get us wrong there. Making good content and making one that's just meh, is a topic for another day. The point here is that, as technology progresses, previously niche-exclusive gears have now become accessible to general consumers. But don't expect Red cameras to be available to general consumers anytime soon.

So, for the longest time, you've been using your phone's (hopefully not your tablet's) camera to make vlogs. It's actually a good way of testing the waters. With our current situation, spending quite some amount of money on a gear you're not really actually sold on might be a bit impractical. Scratch that. It is actually impractical. But you've always felt that given the right gear, your vlogs can reach more people. Well, look no further. We're here to help.

So, what do you really need to look for in a vlogging camera?

Primarily, you'd need a flip-around screen. It's important to see yourself while filming your vlogs. Whether you're after improving the way how you converse with your audience or you just love seeing yourself, having a camera that has a screen that's movable is a godsend. Remember that when vlogging, you're mostly on-the-go. So, carrying too much gear is a no-no. You can always opt for a second screen but that's really not desirable since you'd also need to consider camera shakes. Having a bulky system makes it hard to focus on your vlogs, especially if they're quite long. An alternative is having a tripod or monopod but for some, it won't really be an ideal set up.

Another thing to consider is continuous autofocus (AF). Most vloggers are often on their own. Would you rather be busy checking if your camera is on focus or if your actual content is spot on? Get one with face and eye detection. It's like having an assistant that allows you to concentrate on more important things.

For vloggers that are often outside of studios, getting a camera that has optical image stabilization really helps. Imagine you're walking the streets of Japan, covering the nice and sumptuous street food it offers. You don't really want your audience to get dizzy with all the shaky footage, right?

4K recording is okay but not really a must. The safezone is 1080p. Heck, even 720p is okay in some instances. But just to be future-proof, get one that supports 4K video recording even to up least 24 fps. When it comes to audio, try to get one with a microphone slot. If you record vlogs outside, chances are, ambient noises would make it difficult for your audience to clearly hear you. And when they can't hear you properly, there's a high chance they won't finish watching your vlog.

Lastly, battery life is an important factor to consider. Yes, you can carry extra battery packs. However, most of the time, if you're in the middle of vlogging, you won't notice your camera's about to die. Getting one with a reasonable amount of juice saves you from repeating a shot or even corrupting your video recordings.

Ever wondered what an insect sees? Well, these engineers have created a camera that you can ride on top of insects.