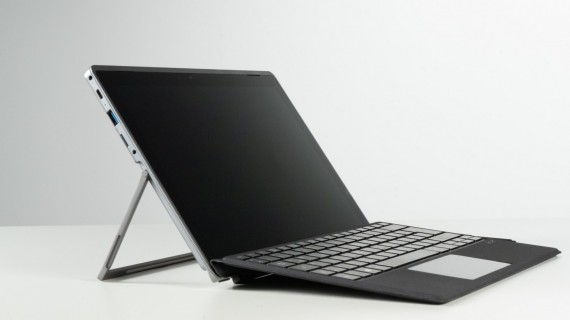 Microsoft Surface Book 3: It Surely Does the Job but You Need Deep Pockets (Photo : Leon Seibert)

Microsoft Surface Book 3 promises to bridge the gap between a traditional laptop and a tablet. But from experience, this approach hasn't usually worked out fine for either side. As much as possible, users prefer laptops with a justifiable screen real estate. Usually, a portable computing device that has a 12.5" to 14" screen is the sweet spot. However, those screen sizes aren't usually ideal for tablet PCs. Aside from the weight, the large handheld devices can be a pain to hold since most tablets are design to be held on one hand with the other hand taking care of touching the screen.

The Surface Book 3 sits between the Surface Go 2 and the Surface Pro. These devices are aimed primarily at regular users and power users, respectively.

Design-wise, nothing has changed much. The hinge is still there. It's functional but we can't really stop ourselves from saying it looks awkward. According to Microsoft, there's a significant reason why "that" hinge is there. It allows the battery and the processor to be put in the back of the screen without the whole "tablet" part falling down. Well, this is a compromise most hybrid laptops face.

As a laptop, the Microsoft Surface Book 3 is a good one. For one, the keyboard is topnotch. Apple is known to have good trackpads. But in their own right, Microsoft's Surface devices also have good track pads.

When it comes to the screen, it's actually crisp and bright. The 13.5" screen can render colors in both sRGB and "enhanced" RGB.

Read also: Chromebook: How to Breathe New Life to Your Old Laptop

The Surface Book 3 is a good laptop. But once you detach the screen, that's when things go a bit sour. Primarily, the screen alone doesn't have any stand. It's either you hold it in your hands or you find something like a pillow to support it from falling down if you're about to Netflix your way across the night.

When it comes to battery life, it gets a bit confusing. Using the device on laptop mode gets you about 12 hours' worth of video playback. However, when on tablet mode, you'd only get roughly 4.5 hours.

Though the Surface Book 3 is great when using a pen, sadly, it doesn't readily come with one. It's a $100-purchase though it'll further improve the usage experience.

$1,600. Yes, that's how much the Microsoft Surface Book 3 costs. And for that price, you'd certainly expect it to either be the best laptop or the best tablet. But sadly, it isn't — on both configurations.

Yes, it has an Intel Core i5 at its heart but other than that, it's just it. It does have a discrete graphics card (GPU) but at the end of the day, it's always better to have a dedicated card running on your system.

Read also: Apple to Possibly Use Cheaper Parts for Its Newer Models

Chromebook: How to Breathe New Life to Your Old Laptop

Chromebooks are good alternatives for people who want to have a simple portable computing device without having to speed too much. For those who are on a tight budget though, there is a way to turn your old laptop into one that runs on Chrome OS.

Apple to Possibly Use Cheaper Parts for Its Newer Models

5G technology has led Apple to possibly use cheaper parts primarily for its battery components. This year’s iPhone 12 series is rumored to ship without a power adapter and EarPods.

The Sony WH-1000XM4 has already been out in the global market early this year. Now, the audio giant is aiming to conquer India’s market.