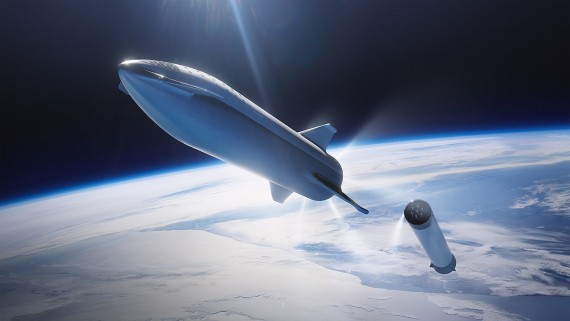 Starship SN8 is the next prototype spacecraft scheduled for a test flight by SpaceX. This follows confirmation from Chief Designer and CEO Elon Musk. "SN8 Starship with flaps & nosecone should be done in about a week. Then static fire, checkouts, static fire, fly to 60,000 ft [18,300 m] & back," Musk said via Twitter on Saturday (Sept. 12).

The test Starship SN8 program will conduct first-ever Static Fire with three Raptor engines. However, two of the Static Fire tests will be done before the test launch. The landing phase will be the most challenging. The Starship SN8 will shut down its Raptors and then use its aero surfaces to land at the launch site. The vehicle will swing the aft vertical by attempting engines relight in its final seconds. "If this works, it'll be the craziest piece of rocket gymnastics since landing Falcon 9," added Lars Blackmore, Sr. Principal Mars Landing Engineer for SpaceX. The ambitious test program will help SpaceX avoid scheduling issues in the future. The data gathered will provide valuable insights into Starship SN8 performance. SpaceX is also prepping a Super Heavy prototype for a maiden flight. These preparations are ongoing at the production area and launch site.

Starship SN8's Raptors will be tested in a series of static fire tests while the spacecraft is tethered to the ground. This will provide additional data regarding the integrity of the engines and their capability to soar to 60,000 ft [18,300 m] & back. SN5 and SN6 didn't have nosecones and only featured single engines. However, the Starship SN8 prototype has three raptor engines, nosecones, and aero flaps. These combinations of features will greatly add-on to the vehicle's capabilities.

If these developments haven't marveled you, then the upcoming final version of Starship with six Raptors will. SpaceX is working on a final version that will carry up to 100 people to Mars, the moon, and other destinations. Unlike the Starship SN8 which features three Raptors, this one will have six Raptors. The 165-foot-tall Starship will launch from Earth on-top of a Super Heavy rocket. The Super Heavy rocket will have 30 Raptors. This magnitude of power will be adequate to launch the Starship off Mars and the Moon.

These technological breakthroughs will improve the economic feasibility of ambitious exploration. This is because Super Heavy and Starship will be reusable. Japanese Billionaire Yusaku Maezawa is the first Starship customer to be booked by SpaceX. Yusaku will fly around the moon aboard the vehicle. SpaceX intends to launch the mission in 2023.

Starship forms a critical part of NASA's Artemis Program. The objective is to land astronauts on the moon near the lunar south pole in 2024. The Artemis program aims to institute a human presence on the moon. As such, the Starship SN8 is part of SpaceX's broader vision on space tourism and exploration.

Chang'e-5 Lunar Sample return mission is prepping for late November launch. This is based on evidence dervived from satellite and ship-tracking data.

SpaceX Delays the Launch of a Big Batch of Internet Satellites: Here’s How to Watch Live

Starlink satellites are scheduled to be deployed by SpaceX aboard the Falcon 9 rocket. The launch is set for September 18 at 1:57 p.m. EDT Friday.

Chang'e-4 is expected to resume lunar exploration operations as part of phase 2 CLEP program. This comes after the successful soft landing on the dark side of the moon on the 3rd January 2019.

The Moon's Surface is Rusting: Is Earth Partly to Blame?

The Moon’s surface is rusting. Despite the Earth being around 384,000 km from it, it seems our planet is a major contributor to this phenomenon.

“Gather Moon rocks and we’ll pay you.” This is the message NASA gave on Thursday for private companies who want to capitulate on the newest frontier—outer space.