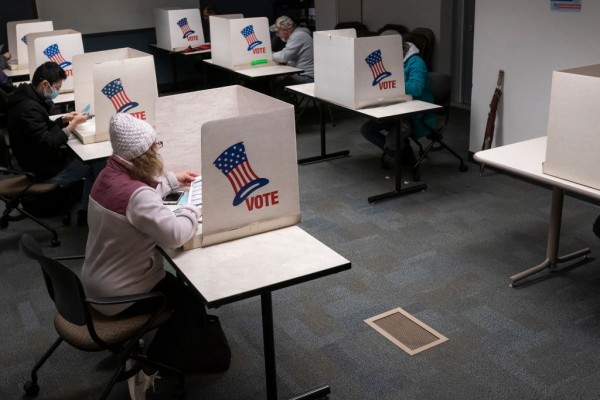 (Photo: Nathan Howard/Getty Images)
VANCOUVER, WA - NOVEMBER 03: Voters fill out their ballots on November 3, 2020, in Vancouver, Washington. After a record-breaking early voting turnout, Americans head to the polls on the last day to cast their vote for incumbent U.S. President Donald Trump or Democratic nominee Joe Biden in the 2020 presidential election.

YouTube, now owned by Google and Facebook, now has an extensive database to fact-check any political ad. With that said, social media platforms have now better prepared to tackle such hoaxes than they did four years ago.

Facebook has let its users turn off any political ad from the platform, as well as on Instagram. The social platform will also label any posts from politicians who announce premature victory. Temporarily, Mark Zuckerberg-owned media also suspends recommendations for political groups.

At the same time, Twitter has banned political ads since last year. The company does not back down when it comes to deleting tweets and temporarily locking its users' accounts. Like Facebook and Instagram, Twitter labels tweets that may include misleading information and direct its users to trustworthy sources.

Google has prohibited conspiracy-fueled videos from its YouTube platform. Like others, they also label political videos and link a direct source to real-time results from the Associated Press. The search engine has also redefined its autocompleting way, preventing its users from donating to any of both parties.

Section 230 gives social media giants protection and immunity from both parties' lawsuits, whether it's Democrat or Republican, over their users' content. It's a testimony of freedom of speech, but also a wake-up call for a much more healthy political election.

The thoughtful discussion, titled "Does Section 230's Sweeping Immunity Enable Big Tech Bad Behavior?," was live-streamed for the public on October 28 at 10:00 AM.

"#Section230 protects American innovation and freedom of expression, and it's underpinned by democratic values," Twitter says in a statement.

Read also: Kanye West Gifts Kim Kardashian a Hologram of Her Father on Her Birthday

Where to Check the Latest Result of the Election?

Since the start of the campaign, Donald Trump from Republican and Joe Biden from Democrat have been going at each other. Both candidates are backed by, respectively, Mike Pence and Kamala Harris.

Statistically, this is the first election in the country's history where all the presidential candidates are older than 70. Interestingly, rapper Kanye West and Michelle Tidball are set to enter the ring. However, the result is still far from the expectation.

The winning candidates will be inaugurated on January 20, 2021. Click on AP's link here for the latest and most centered information about the election.