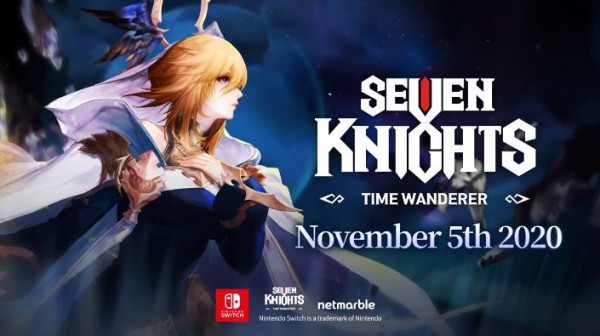 "With the Seven Knights franchise reaching its fifth anniversary, it is immensely gratifying to see the community respond positively to how the game is growing, and we wanted to honor that devotion by taking Seven Knights in a whole new direction," said Netmarble executive producer Young Jae Park in a statement. Seven Knights - Time Wanderer on Nintendo Switch is a perfect introduction of the Seven Knights universe for players eager to experience an epic story with colorful heroes and intense combat, and we are excited to bring fans our first console game to enjoy."

In promotion of the game's debut, Netmarble has teamed up Kingston's gaming equipment arm HyperX to give away a suite of HyperX items for the Nintendo Switch, as well as exclusive Seven Knights - Time Wanderer memorabilia. Additionally, Time Wanderer has also invaded coffee and tea shop Kung Fu Tea across its 170 in-store locations. Fans can enjoy the limited time only Time Wanderer Latte and get a chance to win a copy of the game and Kung Fu Tea app credit worth $15.

Seven Knights - Time Wanderer will be available in its Standard Edition from the Nintendo eShop, starting at $19.99. A Special Edition of the game, which includes the Costume Set Bundle Pack, is available for $27.99.

For Both New and Old Fans of the Seven Knights Franchise

Described as "a visually stunning, real-time and turn-based RPG," the game follows Seven Knights Mobile. However, its Switch sequel features all-new control and battle systems, as well as content designed specifically for the latest Nintendo platform.

Also, fans of the original franchise can expect an original story apart from the hit mobile game on top of being a single-player RPG that requires players to strategically build their own decks to fight through enemies and advance through the campaign. Meanwhile, it will no longer use the gacha system - a randomized lottery-like mechanism in-game for "summoning" characters and items. Instead, characters are acquired by the players as they move along the story.

In case you missed it: PS5 Games Will No Longer Be Region-Locked, Sony Confirms

In its official launch trailer, Time Wanderer will be focusing on the latest addition to the titular Seven Knights - Vanessa Windringer. In her possession is the ultimate magical instrument - a sentient hourglass known as "Sandy." Players will be tasked with collecting "Time Crystals" across different dimensions - promising a wide variety of environments as well as appearances from characters in the original mobile game!

Netmarble Corp traces its origins back to 2000, founded by Bang Jun-hyuk. As a mobile game developer, its largest titles include Lineage 2: Revolution in 2015. The massively multiplayer online RPG (MMORPG) uses the Unreal Engine 4 and was released for both iOS and Android devices. Mobile app think-tank Sensor Tower reported that in 2019, Lineage 2: Revolution was among the largest grossing mobile games, taking in $1 billion in player spending revenues from Google Play and $678 million from iOS users.

In 2018, Netmarble acquired 25.71 percent of shares in Big Hit Entertainment, the talent agency that manages K-Pop groups BTS and TXT, and makes the South Korean game developer its second-largest shareholder.