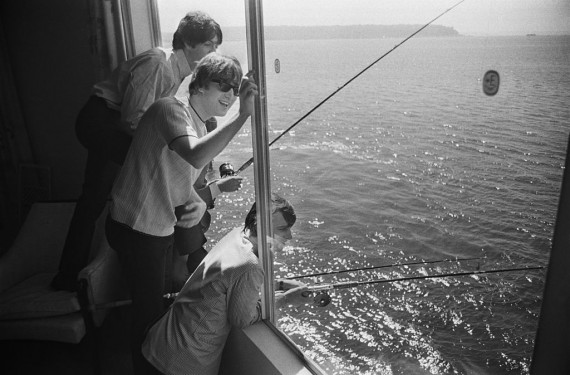 Paul McCartney, John Lennon and Ringo Starr of The Beatles fishing from their hotel room at the Edgewater Inn, Seattle, Washington, 24th August 1964. The Beatles are in Seattle to perform at the Seattle Center Coliseum during their US tour. (Photo : Photo by William Lovelace/Express/Getty Images)

This day marks the 42nd year of the day when the very famous Beatle, John Lennon, spotted an unidentified flying object (UFO) hovering across the skies.

During the 23rd of August, 1974, John Lennon went out to the balcony to gasp some fresh air together with May Pang, his assistant back then. Unexpectedly, the two saw a flying saucer flying over the East river.

The superstar musician claims that it "turn right at the United Nations building, turn left and then down the river." The very weird and promiscuous looking flying object supports a dome shape. Mr. Lennon reiterates: "It definitely wasn't a helicopter."

The possible encounter with the third kind seemed to really be true as it had a deep impact on his life. The reference it had in his later album, Walls and Bridges, was a proof that it was indeed a true incident.

Miss Peng supports the claim saying that right after the sightings were gone, they called the police as well as the New York Daily News to report the strange incident. They were then told that there were also seven other reports claiming to have seen the UFO.

The two had successfully taken pictures, but it later turned out to be over exposed. She later wrote a book that tells her life with John Lennon. It is stated in one of the paragraphs there: "We often had helicopters flying above us but this was as silent as the night and about seventeen."

John Lennon is one of the many high-profile names who had encounters with UFOs.

The universe is a wide expanse of uncertainty. The Earth and the rest of human civilization are just a tiny speck of dust if we were to compare it to the grandeur of the universe (literally).

With this, it is very unlikely that we humans, together with the other animals and plants on this planet, are the only life forms in this world. Let alone, Earth being the only planet that can sustain life.

There are now thousands and thousands of "earth-like" planets that have recently been discovered. This puts us on the brink of discovering new life forms, new worlds, and new civilizations, that is incomprehensibly spectacular.

It is not a matter of if aliens do exist. It is a matter of when they show themselves up for the entire world to see, and not just in individually secretive brief sightings.

UFO Alert Or Just A Camera Glitch? Alleged UFO Has Just Been Seen On The Set Of ‘The Walking Dead’

With the ever-growing claims of UFO sightings, is yet another addition to the rising speculations about extraterrestrial life having been seen. Recognizing this idea, what’s the truth behind claims that an alleged UFO has just been seen behind one of the cast of the American TV series ‘The Walking Dead’? Is it just a camera glitch or a strong proof of alien existence? Here are the details

UFOs Appear By The ISS Before NASA Cuts Livestream

Six UFOs appear alongside the ISS when NASA immediately cut the live feed. Conspiracy theorists are accusing NASA again for alien cover up.

Man-Eating Aliens On A Secret Base Revealed By US Record

An intriguing record from the US Department of Agriculture reveals the existence of man-eating aliens and people working at a secret base in a US National Park. The information comes as a Freedom of Information request reveals other cases of UFO sightings.

Alleged Video Of A UFO Drives Passenger Jet Away

Considering the rise of various UFO sightings to have been recorded, how essential is it for us to know the truth about UFO? As a new video circulates online, what the truth behind claims that an alleged UFO is forcing a passenger jet to ‘swerve out’? Here’s what authorities have to say

Days after UFO hunters made their bizarre claims that a mysterious object was an alien, NASA engineers is now to the rescue by taking a quick snap selfie to prove that there are no aliens or unknown objects involved. Will this finally put an end to conspiracy theories? Here are the details

While IoT and M2M technologies do have some elements in common, they are, in fact, two distinct concepts. M2M applications differ from what IoT is intended for and mostly cover the industrial field. IoT connected objects, on the other hand, pertain more to everyday life and apply to the general public.