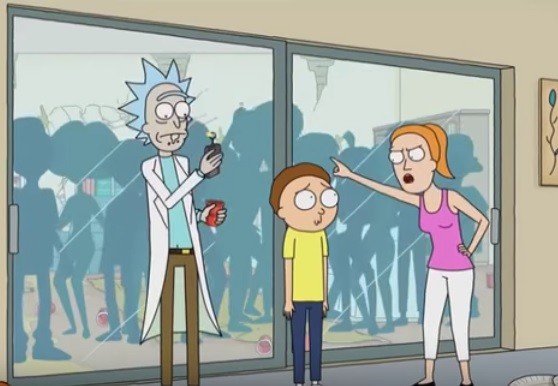 The Mad Scientist and its foul mouth is back with more insults. (Photo : DuckNationWTD / YouTube)

Most of the TV Junkees say that today is the Golden Era of TV Animation. We still have the juggernaut shows such as the iconic "The Simpsons" and "South Park" but there are two animation series that is currently making a buzz.

Creating a TV series is not that easy. You have to spend countless of hours to produce a quality, diverse and original series. There are a lot of TV animation series created already. Some last for only 2 to 3 seasons while others last forever like The Simpsons and South Park. What makes a good TV series? Is it the character? The story? Animation? Or punchline?

Since a lot is already considering this as the golden age of TV Animation, two rising stars have answered the call. ‘Rick and Morty' and ‘Steven Universe' are on top of that list. Both shows are enjoyed by the young and old. The comedy they deliver is golden; so-to-speak. They are now likened to the behemoth TV shows - The Simpsons and South Park. Let us discuss why these shows are one for the ages and let us dig into who is much better.

The Show is often compared as the animated parody of "Back To the Future." The American animated science fiction comedy ranked 4th in the most watched TV series last year. The series is based on a mad scientist named Rick and his gullible grandson Morty. Their misadventures made them closer than ever but also ignites feud between them. Their feud however is not a serious kind of differences. The show shows adult approach where you can see Rick being a stubborn, grumpy old man.

Another futuristic american animated television series; which is made for Cartoon Network. It is a story of a young boy who lives in a mystical town of Beach City. The city contains "Crystal Gems" namely Pearl, Garnet and Amethyst, it also has three magical humanoid aliens. Steven Universe who is a half Gem himself goes on wild treasurous adventures with his friends and helps the Gems protect the world from their kind.

The series garnered positive feedbacks for its characterization, art design, music and voice acting. Steven Universe was already nominated for five Annie Awards and two Emmy Awards. The show's fanbase is very active and broad. The successful series also have released its own comics, books and video games. Steven Universe already renewed its fourth and fifth seasons which means, we have two more seasons to enjoy from this kids' wild adventure series.

Which Show Is Much Better To Watch Then?

Again, it would be hard to pick between the two because they have two distinctive ways to entertain viewers. If you want to have a friendly adventure kind of show, you might want to watch Steven Universe. The animated series is fun, witty and very creative. However, if you want a Rated R type of series, then go ahead and watch Rick and Morty. If you watch some of the uncensored parts of the show in YouYube, you will appreciate adult humor. Rick is like the older version of South Park's Cartman. He just doesn't give a f***.

Cartoon Network's 'We Bare Bears' Gets Another Season, News, Details, Spoilers, Inside

Cartoon Network's 'We Bare Bears' Gets Another Season, News, Details, Spoilers, Inside

Adult Swim announces the official return of "Rick and Morty" Season 3 with the reveal of the release date and a whole new full trailer.

'Rick And Morty' Season 3 Returns This Week, Creators Reveal Mysterious Livestream To Make Up To Fans?

The latest episode of "Rick and Morty" Season 3 might just be released this week as the showrunners invite fans to join them for an upcoming livestream.

‘Steven Universe’ Returns With A New Steven In Season 5

Creator Rebecca Sugar confirmed that fans will be seeing a whole new side to Steven once "Steven Universe" Season 5 returns.