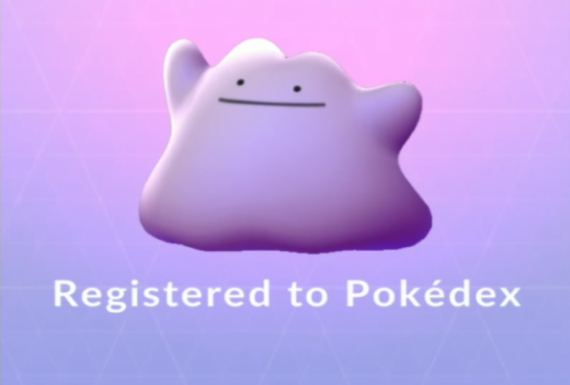 Ditto is now in Pokemon GO and several players have now reported to have caught it. There is a chance that you might already have it, you just don't realize it. But if you are so sure that you don't, then you might want to get outside and look for a pink blob.

How To Spot Ditto In The Wild

Actually, no. Ditto will not appear as it originally looks out in the wild. The shapeshifting Pokemon is known to copycat the image of other creatures. In anime, you would notice that the monster is Ditto because it still has that idiotic face on it: two dots for eyes and one slightly curved line as its mouth.

In Pokemon GO, it seems that it has perfected the disguise. It looks just like the other ones and you will not even know you have caught a Ditto unless you stick around to the animation after catching a Pokemon. So how do you encounter one?

The best way to find one is to go out and catch as many Pidgeys as you can. According to a thread in The Silph Road, Ditto is normally disguised as these Pokemon GO creatures in the wild: Pidgey, Rattata, Zubat and Spearow. Players have also encountered it in the following forms: Metapod, Magikarp, Venonat, Paras, Mankey, Ekans, Snorlax, Doduo and Nidoran (male).

How To Catch A Ditto In Pokemon GO

If you normally ignore those pesky Zubats that are incredibly hard to catch, then this might be the time to start hunting them down. When pressed for time, I normally just catch the ones who are not that common and leave behind the Pidgeys and Rattatas, but Ditto's arrival, I will now hunt every single one of them.

You can also use Pokemon GO lures and incense. These items also work, but as of now, there is no data that shows whether Ditto is more likely to appear as a chance encounter or as a lured Pokemon. The best you could do is try these out and then let the community know how that turns out for you.

Also, it is important that you pay attention closely after you have caught a Pokemon. Sometimes, we don't stick around for the cutscene. But now that Ditto has arrived in Pokemon GO, I think we would all be now glued to the screen. It appears before the score card, so watch out.

You May Have Already Encountered One

Another way of finding out is checking your Pokedex. If you have unknowingly encountered one but haven't caught it, it will count towards your "Seen" Pokemon. If you have already caught it, then you would see it in its pinkness with that face in entry #132 right before Eevee.

Pokemon GO users have also reported catching multiple Dittos, but I assume that the chances of that happening are extremely rare. But why is everybody so obsessed with it? One: for bragging rights. Two: it has cool abilities, which includes automatically transforming into the Pokemon you are battling with.

There are a lot more to this pink stuff, so watch out for our next Pokemon GO comprehensive guide to Ditto. Have you caught one yet?

Niantic has just revamped the CPs of nearly every Pokemon. Some were nerfed, others were buffed, but one Pokemon stays the same.

Pokemon Sun And Moon Guide: Get Team Skull's Passwords And More On Them Here

Can't be bothered on finding the clues in Shady House? We got every answer to every question right here. Plus, a commentary on Team Skull's antics in Alola.

Pokemon Sun And Moon Guide: Get A Shiny Pokemon Using These Methods

Increase your chances of getting a Shiny Pokemon using these methods. Will you wait for a rare encounter or get yourself up to get what you want?