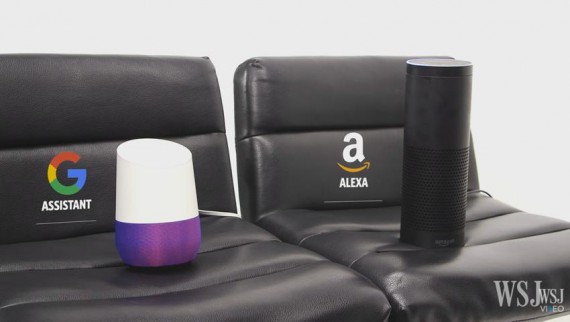 There are particular issues with the reigning competitors in the smartspeaker world - Google Home’s lack of third party support and the Amazon Echo’s lack of conversational skills - which each company is preparing to address. (Photo : Wall Street Journal/YouTube)

When the Amazon Echo was first introduced, it revolutionized what a virtual assistant could do and offer to a user. For the longest time, the online retailer was reigning at the top of the charts with the device. But all regimes will involve conflict at one point or another, which came in the form of the Google Home in this case. But as a new entry to the market, it does have its share of issues.

The main issue right now for the Google Home is that there is very little third-party support for the device. Unlike the Amazon Echo, which has its AI, Alexa, hooked up to various partners - resulting in thousands of skills - Google Assistant can only shake hands with few developers. The search engine giant, who is aware of this problem, is addressing the same and has promised partnerships will soon follow.

According to Arc From Applause, Google has confirmed that developers now have the ability to build voice-enabled applications for Google Home via what the company is calling "conservation actions." Theoretically, the platform will allow these third-party companies to create new interface. In order to this, interested companies will rely heavily on Google's natural language processing.

"Conservation Actions help you fulfill user requests by letting you have a two-way dialog with users," Google said Google stated in an Actions on Google reference guide. "When users request an action, the Google Assistant processes this request, determines the best action to invoke, and invokes your Conversation Action if relevant. From there, your action manages the rest, including how users are greeted, how to fulfill the user's request and how the conversation ends."

Adding a handful of partners in this feature will definitely help but the Google Home ahead of itself now. Which is saying a lot, considering the hype surrounding the smart speaker. Ever since its release, it has been seen as a contender. And while it has been holding out its own already, Google's focus is sure to keep it on track.

On the other hand, the main concern with the Amazon Echo is that it does not and cannot - at this point - converse in the same way that Google Home does. The veteran player can understand and recognize voice commands, but cannot initiate a response in a slightly intimate manner. With the new release from Google, users can follow up one question with another, without having to go back to ground zero.

However, an interview between BackChannel and Amazon's vice president of Alexa, Rohit Prasad, has confirmed that the company is working on developing this particular feature of the Amazon Echo. However, Prasad was also quick to notify that the changes will be within reason, as the device will still be a "smart one" that can deliver without the nuisances. He also said that where the device is now is pretty exciting for the company.

"We're excited about where things are," he said. "And we've made huge progress in teaching Alexa to better understand you, both in terms of the surface area Alexa covers, as well as accuracy within search material." Prasad then went on to discuss the conversational future of Amazon Echo, stating that high accuracy is the end goal.

"From a conversational aspect, I think there a lot of trade-offs on doing it right. Alexa shouldn't come back and ask you [needless] questions," he explained. "But Alexa should always ask a question when needed, and the ability to have a conversation is super important as well."

Amazon Echo vs. Google Home: Which Smartspeaker To Welcome In This Holiday Season

If there is one smart buy to make for the family this holiday season, it has to be a smartspeaker. But the Amazon Echo and Google Home each have their own strengths and limitations.