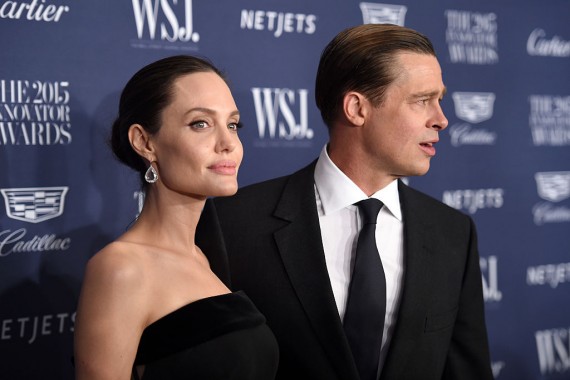 It has been months since the controversial divorce of Hollywood's power couple Brad Pitt and Angelina Jolie shocked the world. And this latest Brangelina divorce updates might be the most intriguing and ridiculous of all. Apparently, there were claims that the rift was caused by British witches.

In today's modern technology, one might think that malignant forces are just a figment of one's imagination. However, these forces are now being linked to the controversial divorce of Brad Pitt and Angelina Jolie. Or so it seems.

A recent report from The Sun suggests that the Brangelina divorce was triggered by an alleged "two witches." Apparently, Baroness Arminka Helic and former William Hauge adviser Chloe Dalton is now being pin pointed as the cause of Jolie and Pitt's rift.

The two British pals - referred to as the "two witches" - have been reported to get in the way of the A-list couple's marriage last year. Rumors have it that the two witches egged Jolie to end her marriage with Pitt as they clutch their way to the actress' life.

A source revealed that Jolie, Helic, and Dalton even ganged up on Pitt with the latter eventually taking defeat, "The three are in a cahoot together and it's Brad who loses out. It's very easy."

It was also revealed how Pitt eventually disliked the two witches despite the fact he used to be in good terms with them. "At first he enjoyed having them around. But you could see, especially in the last year, he started to get more and more infuriated with them because they would never be out of the room," the source claimed.

The same source also added that Helic and Dalton seemed to have brainwashed Jolie to the point that she makes a decision with them instead of her husband. The source also revealed, "Every time he went into a room and wanted to speak to Angelina, they'd be there in the background. And he could definitely see the change that was going on where they would constantly advise her."

Another source continues, "You'd catch them whispering into her ear either side of her and then as soon as you walked into a room they'd go quiet and stare at you."

It was also reported that Helic and Dalton allegedly convinced Jolie that she could become Secretary General of UN by moving to London. There were also claims that the two advised Jolie to seek help from the L.A. County Dept. of Child and Family Services regarding Pitt's alleged altercation with son Maddox on board a private jet.

Adding doubt to the two is the amount of money Jolie invested in the Jolie-Pitt Helic Foundation dedicated to education and violence to women prevention. Rumors have it that Jolie lent £368,686 to launch the foundation but did not receive any money back. In addition, official documents reveal that Jolie is the sole director responsible for covering the foundation's debts.

So far, there has been no concrete proof to justify these claims. Neither Jolie nor Pitt has addressed the said issues.

Selena Gomez is now in the picture of Brad Pitt and Angelina Jolie's highly publicized divorce. Find out why.

Johnny Depp is now being dragged into Angelina Jolie and Brad Pitt's divorce drama. Is there any truth to these allegations?

Love is dead. Power couple Angelina Jolie and Brad Pitt called it quits after twelve years of being together.

BraddPitt was teary-eyed as he surprised his make-up artist, Jean Black, and a long-time friend for 30 years during the Season 1, Episode 1 of Celebrity IOU on HGTV.

Angelina Jolie And Brad Pitt’s Divorce On Hold, Here’s Why

Angelina Jolie is reportedly overwhelmed with her current situation that she is putting her divorce with husband Brad Pitt on hold to talk about things.

Angelina Jolie is reportedly getting lonely after her separation from husband Brad Pitt but good thing though that she has a lot on her hands to keep her busy and distracted.