Chevy Versus Tesla: Who Will Reach The Spot For Americas Top Electric Car 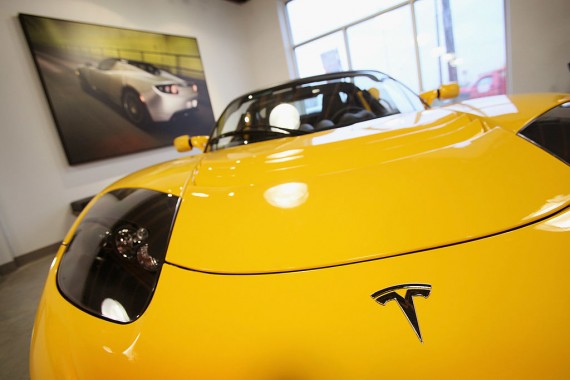 American car companies Chevrolet and Tesla have been going toe to toe with their electric cars. Both have something to offer the rivals the other. Who will get the spot for the best electric vehicle. <br /> <br /> (Photo : Photo by Scott Olson/Getty Images)

The Chevy, with their electric car Bolt EV, has received multiple awards including Motor Trends Car of the Year. It was the first all-electric, mid-market vehicle to surpass 200 miles on a single full charge. The cost for the Chevy Bolt EV is also more accommodating to consumers with its $29,000 dollars base price.

The Bolt EV Is Cheaper And Can Go Farther

Tesla, on the other hand, has released the Model 3 that comes at a more expensive $35,000 dollars price tag for its base model. It does have a higher range that is 215 miles in a single charge. However, a recent testing of the Bolt EV achieved a 238-mile range, which still makes it a winner in terms of price and range.

All Wheel Drive Is An Advantage For Tesla

The Tesla Model 3 does come in an all-wheel-drive version, which is not offered by the Chevy Bolt EV. But that still does not make the Tesla better than what the Bolt has to offer. The Model 3 is scheduled for delivery by late 2017 or late 2018 and already has 400,000 pre-orders. Which means that other consumers may never get the chance to get their hands on newer and better electric vehicles that will surely come out next year. Consumers have a better chance of driving a Chevy Bolt EV, as the company has not mentioned any issues in delivering to customers.

On Tuesday, three customers already received their Chevy Bolt EV in San Francisco. Other units for the Bolt EV will continuously be delivered to the customers. And by the end of 2017, the first owners of the Tesla Model 3 will receive the car, which may be too late. The Chevy Bolt EV may already have a newer version by that time and will once again leave Tesla trailing behind in terms of both technology and sales.

Even The Nissan Leaf Can Beat The Model 3

Tesla, with its Model 3, is hoping to give consumers a budget-friendly electric vehicle. Unfortunately, cars like the Bolt EV and even the Nissan Leaf has already beat them to it. The Nissan Leaf is also a capable car with a 250-mile range rating that is once again better than the Tesla's. The Model S can reach 330 miles on a single charge but will cost the consumers a larger sum of money.

By April 2017, one percent of new cars on the road will be electric vehicles. The electric car industry is slowly changing and moving us forward into the future. Tesla, as promising as their technology is, needs to learn how to appeal to how consumers can avail their vehicle at a much justifiable cost. It would probably be perfectly fine if they remain the exclusive manufacturers of electric vehicles, however, other companies have quickly reached up and are slowly surpassing them. They need to step down from their current price and step up their game if they want to make it to the top spot as the world's number one electric car company.

2017 Toyota Prius Prime: Everything You Need To Know

The Toyota Prius started the road to hybrid vehicles. Utilizing both a petrol engine and an electric motor to optimize fuel performance. The 2017 Prius Prime is sure to be better than the previous versions.

As far as affordable electric vehicles are concerned, until Tesla begins production of the Model 3, the Chevrolet Bolt is in a class by itself. However, in 2019, it seems that things will be different as these two American EV’s will soon meet their competitor from Volvo’s own version of EV.

Tesla Model S Vs The Chevy Bolt EV: Which One Is The Winner?

Considering that Tesla's Model S and Chevy bolt are both vying to be this year’s Motor Trend Car of the Year, which vehicle company has got more chances of bagging the title? Which has more coverage in terms of range? Find out the details