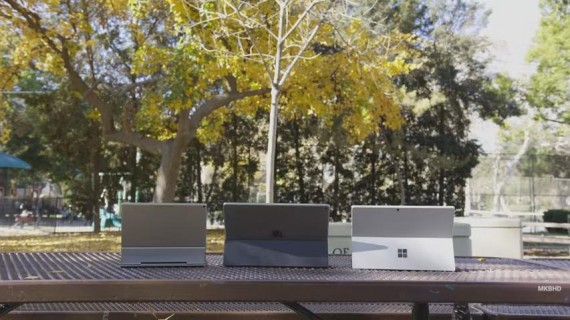 2016, which was a great year for tech in general, is coming to a close. However, 2017 is looking even brighter, especially with the tablets that are expected to arrive to the market. (Photo : Marques Brownlee/YouTube)

2016 has seen its share of hits and misses this year in the tech industry, but the year is almost up and there is only more to look forward to. Some of the biggest names, in particular, are already scheduled to release products that will undoubtedly make waves with the public. And in terms of the best tablets that are expected, Microsoft's Surface Pro 5, Samsung's Galaxy Tab 3 and Apple's iPad Air 3 are some of the anticipated ones.

As PC Advisor notes, Microsoft likely delayed the release of the Surface Pro 5 to the early months of 2017 because it is waiting for stock of Intel's latest Kaby Lake processor, as well as the release of an update to Windows 10. Nevertheless, it is expected to come with several more updates and improvements other than a change in processor. It will undoubtedly be the best tablet that the Redmond-based company has ever offered.

The Surface Pen, which allows users to write directly onto the Surface Pro 5's screen, is expected to receive its own update. This alone will better the entire experience of the 2-in-1 hybrid tablet. But when it comes to the device itself, it is expected to have better battery life, as well as a USB Type C connection and a 4K screen.

The same publication notes that the newest generation of Samsung's famed Galaxy Tab S series will arrive sometime within the first quarter of 2017. As the latest addition to the series, there is a lot of pressure and expectation with the device. However, the Korean tech giant is expected to still blow the Android world away.

There will probably be two variants of the device, as an 8 inch and a 9.7-inch model are expected to reach the market. Multiple reports claim that it will sport the same curved edge design as the Galaxy S7 Edge, but it will definitely be more than just a beauty. The Galaxy Tab S3 is estimated to come powered by the Qualcomm Snapdragon 652 processor, as well as 3GB of RAM and 32GB of storage.

The iPad Air 3 was actually expected to launch earlier this year in March 2016 when Apple had an event. The Cupertino giant's succeeding September and October events also failed to display or announce the tablet. And while the company has not released a statement confirming it will arrive next year, it is likely to arrive in March 2017.

Its rumored specs include a Smart Connector for easy connection to a Smart Keyboard. In addition to this, the iPad Air 3 is also expected to be compatible with the Apple Pencil. Furthermore, the device is expected to be thinner than ever before, as well as an upgraded processor. It is expected to be available in silver, gold, space gray and rose gold.

Tablet Monkeys notes, however, that there are other tablets that will be released as well. These include the Asus Zenpad 3, which will run on Android 6.0 and will be released as early as January. Another is the Lenovo Tab3 8 Plus, and the Lenovo Yoga Tab 3 Plus 10. In the second quarter, the Nexus 7 is expected to arrive in the market.

After a relatively stagnant year, the public is expecting nothing short of the best from Apple, particularly because it will be the 10th anniversary of the iPhone. Fortunately, it looks like all things are lining up for the Cupertino tech giant.

2016 Google Tricks To Change How You Search

Throughout the years, Google has become more than just a search engine - it has become one of the most recognized and powerful tech companies in the world. But amidst all its power, it still knows how to give a little bit of fun.