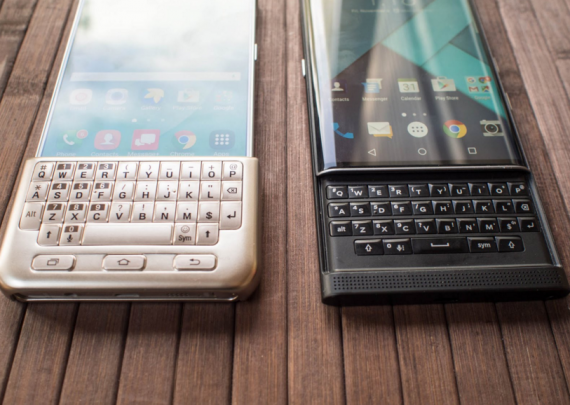 BlackBerry and its new hardware partner, TCL, confirmed that next generation BlackBerry smartphones would be unveiled at CES 2017 in early January. (Photo : AV gadgets/YouTube)

Last week, BlackBerry (BB) and TCL, BlackBerry's new hardware partner, confirmed that their next generation smartphones would be unveiled at CES 2017 scheduled for January 5 to 7.

As of now, there are no exact and official details about the upcoming handsets of BlackBerry. Rumors suggest that one of the possible smartphones might be the BlackBerry Mercury with model number BBB100. It is an Android 7 Nougat-based phone with a hardware QWERTY keyboard and a 4.5-inch touchscreen display.

According to Digital Trends, the new BlackBerry Mercury BBB100 seems to be a mid-range smartphone. Besides on its 4.5-inch screen and a QWERTY keyboard on hardware, this BB Mercury is expected to feature an octa-core Qualcomm Snapdragon 821 chip, 625 processor and resolution of 1,680 by 1,080-pixels.

It is also rumored to have fingerprint scanner which is integrated into the space bar. In terms of memory, the BBB100 will have 3 GB of RAM, 32 GB of storage space and a pretty generous 3400 mAh battery. But again, it’s still unclear when we’ll see the BBB100, but TCL and BlackBerry may have something in store for us at CES 2017 next week.

The fingerprint sensor is integrated into the space bar. Enabling me to authenticate for anything that needs my password -- without changing my hand position."

According to Phone Arena, the BlackBerry Mercury will be released in the US by Verizon Wireless. It is an American telecommunications industry that offers wireless products and services. Verizon wireless operates a national 4G LTE network covering an approximately 98 percent of the U.S. population. In December 2015, Verizon won or tied for top honors in each category of the RootMetrics RootScore Reports.

Verizon Wireless also offers mobile phone services through a variety of devices. Its LTE in Rural America Program, with 21 rural wireless carriers participating, covers 2.7 million potential users in 169 rural counties. Verizon Wireless announced in 2015 that it was developing a 5G, or fifth generation, network. With 142.8 million subscribers as of July 2016, Verizon Wireless is considered as the largest wireless telecommunications provider in the United States.

Unfortunately, there are still no words on when the BlackBerry Mercury BBB100 is supposed to hit shelves, but rumors assume that it's going to happen in the first half of 2017. Also, the device will almost surely be offered unlocked, too. Verizon is currently selling the BlackBerry Priv, so the Mercury could become the carrier's second Android-based BlackBerry.

BlackBerry Priv is the first-ever BlackBerry to be powered by Android. It actually combines Android accessibility and BlackBerry security in one sophisticated device. DTEK monitors your device and provides a heightened level of security. The 3410 mAh battery, dual keyboards plus BlackBerry’s exclusive productivity features provide a powerful smartphone experience.

BlackBerry "Mercury" BBB100 is coming to Verizon in the US.

A twitter post from Roland Quandt revealed an interesting news that the upcoming BlackBerry Mercury BBB100 is apparently coming to the United States through Verizon Wireless. Quandt also stresses that although BBB100 is design by BlackBerry and it is actually built by TCL.

Blackberry KEYone Sold Out Online In Many Countries

TCL president Steve Cistulli admitted that a lot of its customers are facing a lot of issues regarding stocks. However, he also added that they are now working closely with its retail partners to ensure additional stock of the KEYone.

BlackBerry’s KeyOne is the best smartphone users can buy this year with a physical keyboard, impressive features and known as the most secure phone.

Blackberry KeyOne vs Nokia 3310: Battle Of The Retro Phones

Blackberry and Nokia have both released retro-inspired handsets this year, which focus on bringing back the physical keyboard. Which of these two would be the best blast-from-the-past phone for you?