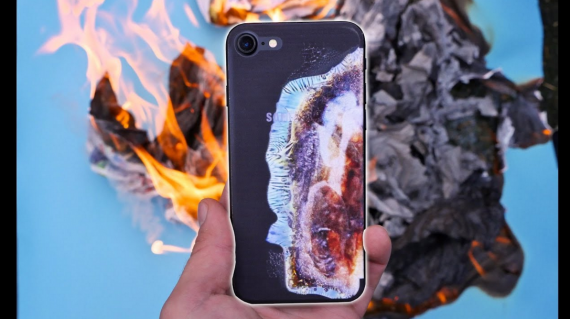 The real cause of the explosion happened on Samsung flagship Galaxy Note 7 is said to be finally revealed this month. (Photo : EverythingApplePro/YouTube Screenshot)

Samsung Electronics suffered a major loss since its first recall of Galaxy Note 7 on September 15, 2016. This January 2017, the company is going to reveal the results of the observation to its product failure.

The Samsung Electronics Co Ltd. decided to permanently stop the production and selling off their flagship smartphone, Galaxy Note 7, in October 2016. Even though it meant that it may acquire a loss of $5.1 billion to its operating profits over next three-quarters.

"Because consumers' safety remains our top priority, Samsung will ask all carrier and retail partners globally to stop sales and exchanges of the Galaxy Note 7 while the investigation is taking place," Samsung said. As reported, Samsung's third-quarter mobile earnings for the year 2016 to 2017 financial year have been the lowest in nearly eight years, a dive of 98 percent since the earlier year.

The Real Cause Of The Explosion

Samsung, as a company, is now trying to learn from its mistakes and currently rebuilding its consumer trust and loyalty once again. According to Latino's Health, the probe examined every aspect of Samsung Galaxy Note 7 production, including its hardware, software as well as the manufacturing process, to find what was the real cause of the fires and explosion to happen.

When Galaxy Note 7 was launched back on August 19, 2016, it was really an in-demand smartphone. In fact, according to the Tech Times, 200,000 pre-orders poured in just 2 days. The pre-orders were so high in South Korea itself that its international release had to be delayed due to the shortage of the supplies.

Samsung is finally ready to reveal why its Galaxy Note 7 phablets caught fire last year. According to South Korea's JoongAng llbo, a combination of factors was responsible for the phablet combusting, and the company is looking into all of them. By announcing the results of its investigations, Samsung is not only securing that they don't repeat the mistakes but will also try to regain its customers' trust and loyalty.

The Galaxy Note 7, which was initially viewed as one of the best devices Samsung ever created, saw a very dramatic turnaround. Because now, it is considered to be the worst devices among all the South Korean company's portfolio. The investigations by the third-parties have concluded that the main cause of the different explosion scenarios was the aggressive battery design.

In reality, the Samsung Galaxy Note 7's super-slim body shape meant that the big battery was continually being compressed or tightened. This resulted in the positive and negative layers to squeeze together and eventually created a heat impact. This led to the battery heating up and cause the unexpected explosion. This finding was in line with the earlier claims by the US Consumer Product Safety Commission, which too concluded that the "phone's battery was slightly too big for its compartment and the tight space pinched the battery, causing a short circuit."

The exchanged version of Samsung Galaxy Note 7 used batteries from another manufacturer but the incidents of fire continued to happen. According to BGR, there are still those who continue using the smartphone, the company is employing different methods to stop them.